Eyeing victory for a third-term, the BJP paraded some of its biggest names and carefully recruited power players from its rivals. 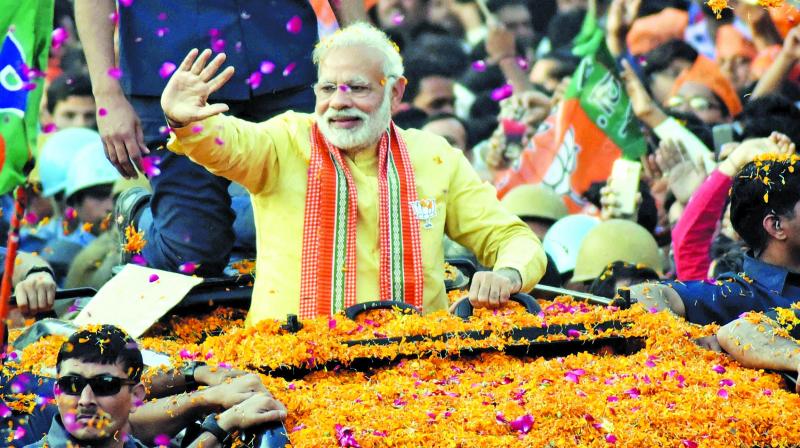 The BJP focused on Prime Minister Modi's image and achievements, thereby showing that the AAP and Congress leaders were no match to him. (Photo: PTI)

New Delhi: The BJP's early lead in all the three municipal corporations of Delhi is a clear indication that the people have voted for Prime Minister Narendra Modi and vented their ire on the Aam Aadmi Party (AAP) led by Arvind Kejriwal.

The verdict clearly indicates that Delhiites have no more expectations from Kejriwal as they feel that the AAP has miserably failed in delivering its duties in the last two years.

Eyeing victory for a third-term, the BJP paraded some of its biggest names and carefully recruited power players from its rivals. Union Ministers Rajnath Singh, Uma Bharti and Smriti Irani campaigned in the different precincts of the capital to ensure the BJP's splendid show.

The BJP focused on Prime Minister Modi's image and achievements, thereby showing that the AAP and Congress leaders were no match to him.

Moreover, the BJP got an advantage as Delhi Congress leaders Arvinder Singh Lovely and Barkha Shukla Singh joined the saffron brigade just before the elections.

The negative campaigning by the AAP also gave an edge to the BJP as Kejriwal in his desperate bid to convince the voters reiterated that more dengue cases will happen if the saffron party won the MCD.

Kejriwal's former colleague Shazia Ilmi said it a rejection of negative politics of the conspiracy, blame game, shoot and scoot politics by the AAP.

"I would like to warn Kejriwal not to blame EVM and leave politics as a career. He is drama queen. He is very good at making baseless stories, conspiracy theories. He should not fool the people and blame other for his sins and omissions," Ilmi told ANI.

BJP leader Sambit Patra said the verdict makes it clear that Delhi did not vote for the AAP courtesy Kejriwal's aggression.

The run-up to the elections was dominated by allegations of tampered EVMs made by Kejriwal, a charge rejected by the Election Commission.

Kejriwal, who had earlier demanded that the election be postponed till arrangements for VVPAT-equipped EVM were made, also attacked the State Election Commission claiming that reports of "faulty" EVMs were pouring in from across the national capital.

The AAP supremo also alleged that many voters with valid voter slips were "not allowed" to exercise their franchise in the municipal polls.

Kejriwal's questioning of the Election Commission's impartiality was also seen by many voters as an insult to the institution.

Two years ago, the AAP had dramatically won the assembly elections as it lost just three out of Delhi's 70 seats, all to the BJP.

But Kejriwal government instead of focusing on some of its popular schemes like mohalla clinics, regulation of fee in private schools, cut in power and water bills wasted a lot of its time in fighting the Centre and the Lieutenant Governor.

The stakes for AAP were the highest as it had barely recovered from its Punjab and Goa defeats.