Magenta Line coaches to be broader

Senior DMRC officials also said all coaches to be introduced under Phase-III of the Delhi Metro rail network would be broad-sized only. 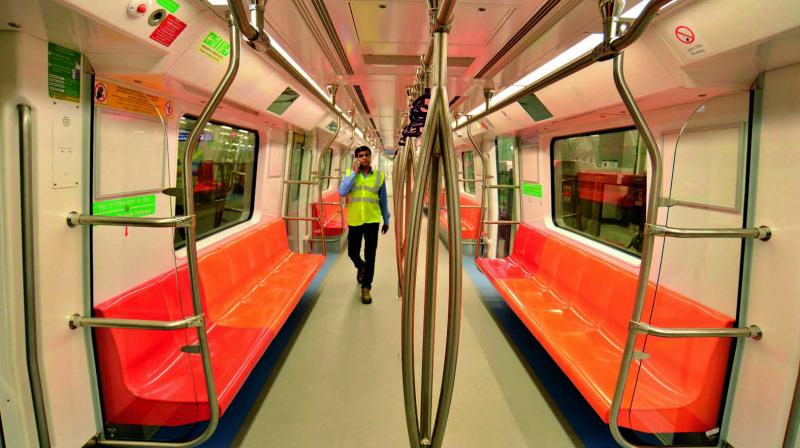 An inside view of Delhi Metro’s Magenta Line during a trial run. (Photo: PTI)

New Delhi: In a first, broad-sized coaches will ply on the standard gauge track of the Magenta Line of the Delhi Metro, the Kalkaji Mandir-Botanical Garden section of which is set for a mega launch on Monday.

Senior DMRC officials also said all coaches to be introduced under Phase-III of the Delhi Metro rail network would be broad-sized only.

“Coaches measuring 3.2 m in width will be in operation on the new Magenta Line. This would also allow 30-40 more passengers than the capacity of coaches running on a standard gauge,” a senior DMRC official said. Presently, carriages, measuring 2.9 m in width are in use on existing standard gauge corridors — Violet Line (Kashmiri Gate-Escorts Mujesar) and Green Line (Kirti Nagar-Mundka), another senior official said. “This new Magenta Line would thus become the first standard gauge-based corridor to have broad-sized coaches plying on it,” he told PTI.

Yellow Line (Samyapur Badli-Huda City Centre) and Blue Line (Dwarka-Noida/Vaishali) are among the broad guage lines on which wide coaches ply. Set to be inaugurated by Prime Minister Narendra Modi, the Magenta Line has many other firsts to its credit. The new line has platform screen doors (PSDs) on all nine stations that will become operational from tomorrow, besides a high-tech signalling system that will allow the Delhi Metro Rail Corporation to run trains with enhanced frequency.