n the melee, nine persons, including a guard of the wildlife department, were injured, the official said. 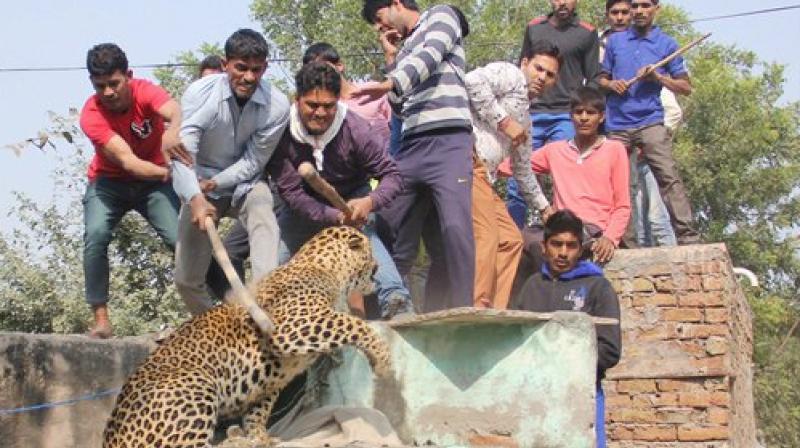 Villagers beat a leopard that ran amok on the streets of Mandawar village causing panic among people, near Gurgaon. (Photo: PTI)

New Delhi: A leopard was allegedly hacked to death by angry villagers in Sohna area on Thursday morning after it strayed into human habitation and injured nine persons. The animal was spotted at Mandawar village in the morning hours. “It was seen attacking a few stray animals,” said Gurgaon conservator of wildlife, Rambir Singh.

Soon, a huge crowd of nearly 1,500 people from nearby Kasan ki Dhani and Sukhroli villages gathered and started attacking the animal with axes, bamboo sticks and stones, he said.

In the melee, nine persons, including a guard of the wildlife department, were injured, the official said. Meanwhile, irate villagers complained that the forest officials reached the venue late. “We informed the forest department and Gurgaon police immediately after spotting the feline. However, they reached the spot late,” a villager Dhani Ram said. Mr Singh, however, said that a team of district forest officer, three inspectors and veterinary doctors reached the spot within half-an-hour. “We faced difficulty when an aggressive mob of around 1,500 villagers started attacking the leopard,” he said. The Wildlife Conservator said legal action would be taken against those responsible for the death.