After 25 years, heritage steam engine back on track

Almost 25 years after steam engines were phased out from Indian Railways. 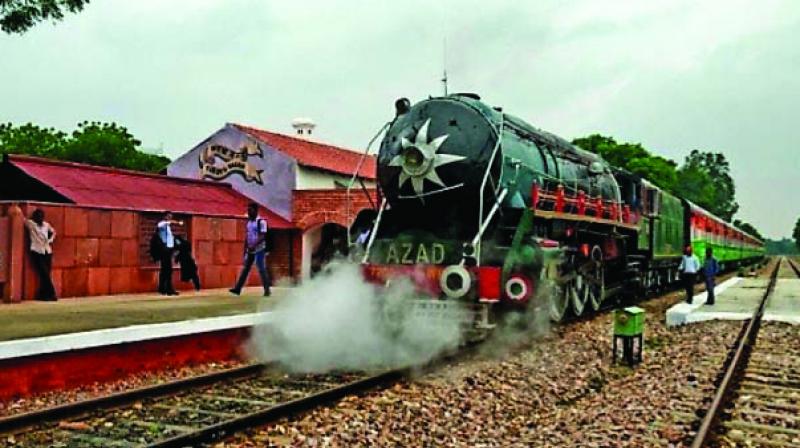 It is for the first time that a time-tabled weekly commercial steam train service has commenced between Garhi Harsaru and Farukhnagar section of Northern Railway.

New Delhi: Almost 25 years after steam engines were phased out from Indian Railways, it is the first time that a time-tabled weekly commercial steam train service has commenced between Garhi Harsaru and Farukhnagar section of Northern Railway.

To fulfil the long standing demand of the public for train service on Sunday, the chairman of Railway Board, Ashwani Lohani, made the announcement on September 15 during his visit to Farukhnagar. It was the day the Swachhta Hi Sewa Pakhwara (Mission Clean India) commenced.

According to a senior railway official, it is envisaged that tourists and steam engine enthusiasts from all over the world would visit these places for a ride on steam engine hauled train, thus increasing tourism related activities in the region.

Presently, the train is being hauled by steam engine ‘WP7200 AZAD,’ a broad gauge 1947, ‘M/s Baldwin Locomotive Works USA’ make. It was brought to India in 1947, the year of independence, and hence named AZAD.

“The locomotive has been restored to its pristine beauty and mechanical engineering perfections. Its revival has been carried out at Heritage Steam Shed in Rewari in keeping with the insistence of the minister for Railways, Piyush Goyal, in reviving tourism and preserving railway heritage,” said Arun Arora, the principal chief mechanical engineer of Northern Railway. The train, 04445 Garhi Harsaru-Farrukhnagar Steam Special, departs from Garhi Harsaru at 9.30 am to reach Farrukhnagar at 10.15 am. In its return service, the 04446 Farrukhnagar-Garhi Har-saru Steam Special departs from Farrukhnagar at 11.15 am to reach Garhi Harsaru at 12.00 pm. This train has a stoppage at Sultanpur Kaliawas Halt in both directions. “It is a great day in the history of Indian Railways that heritage is being preserved and its display and ride is now open to public at a nominal fare of Rs 10 only,” said a senior Northern Railway official.