In another study done on eggs, it pointed out that eggs may contain large amounts of salmonella, both on the shell and inside the egg. 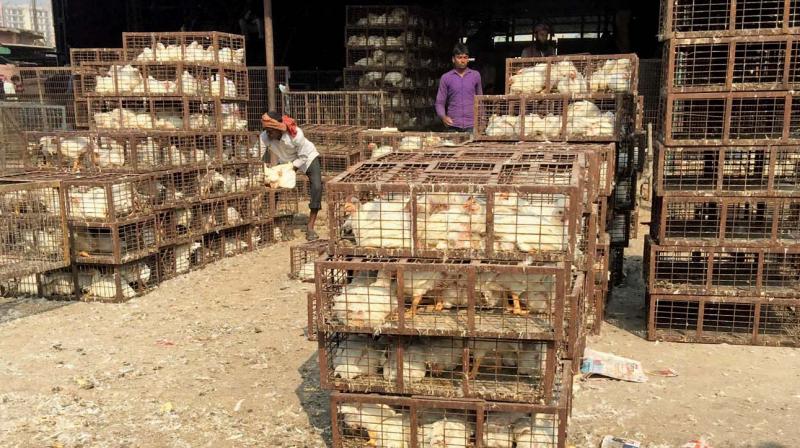 The study was conducted by NEERI with the help of the Haryana Pollution Control Board. There is very little regulation with regard to poultry farming in India.

New Delhi: Caged poultry products, which are widely used in Delhi and NCR region, are dangerous for human consumption. A study by the National Environmental Enginee-ring Research Institute (NEERI), a Central government body in three places (Karnal, Sonipat, and Gurgaon) in the neighbouring Haryana, has revealed that unhygienic poultry farms could lead to sudden outbreak of bacterial, viral, fungal, and communicable diseases like avian influenza, pox, pasteurella, coryza, and aspergillosis. This also means that eggs from these farms are also unfit for consumption due to high risk of contamination.

A team comprising three scientists of CSIR-NEERI visited caged farms in Sonipat and Karnal districts and a cage-free farm in Gurgaon to understand poultry farm practices. They also did an assessment of environmental status at poultry farms and heavy metal analysis in feed grains and excreta slurry.

In another study done on eggs, it pointed out that eggs may contain large amounts of salmonella, both on the shell and inside the egg. However, fresh eggs collected from farms indicated less salmonella contamination. Since most consumers buy eggs from retail outlets, the chances of contracting salmonella infection increases.

The study was conducted by NEERI with the help of the Haryana Pollution Control Board. There is very little regulation with regard to poultry farming in India. This is the reason why even the Law Commission had begun to look into the matter. The total poultry population in India is 729.2 million, which is 12.39 per cent higher than the numbers in the previous census (Livestock Census, 2012).

Odour generation and mites in the farms are two major problems in closed-caged system, which is not observed in the cage-free system. The cage-free system provides enough space for the movement of hens and the kind of environment required to express their natural behaviour, says the report.

A few months ago, the Law Commission of India, in its 269th report titled Transportation and House-keeping of Egg-laying hens (layers) and Broiler Chickens, also stressed on the need to put an end to the cruel practice of confining birds in these small cages.

According to the report, the Law Commission of India has specified certain space allocations. The report further says that viable alternatives to battery cages, which can be adapted for commercial production, have also been identified, including aviary systems with multiple tiers and a high stocking density where perches are located on the elevated tiers so that hens may preferentially roost higher off the ground. It has also identified free-range systems, in which hens are housed in a single-tiered barn or multi-tiered aviary and are even provided with outdoor access.

The report recommended that to encourage the existing poultry farm owners to make changes in the present caged-system, suitable rebate in tax or subsidies may be given to the poultry farms who adopt such systems. All new poultry farm should also follow cage-free system from the beginning.

Recently, a report released by the Centre for Science and Environment (CSE) warned that misuse of antibiotics in poultry farms is leading to multi-drug resistant bacteria — which is spreading in the environment through unsafe disposal of poultry litter and waste in agricultural fields — with the potential to infect human beings.