Kejriwal asks manufacturer to ensure that app is not misused. 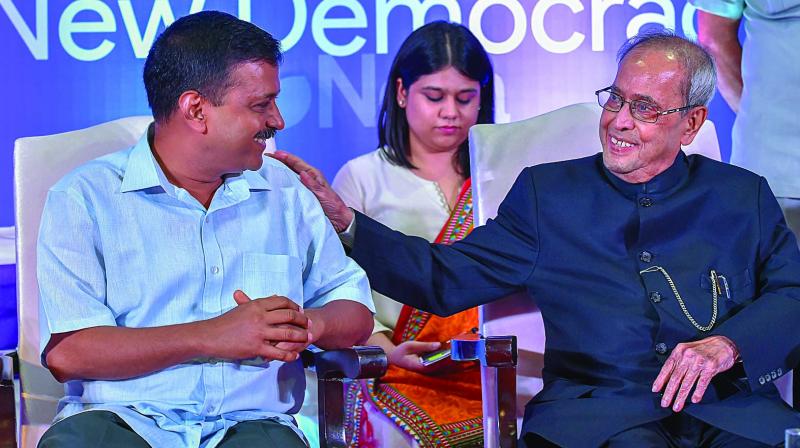 Former President Pranab Mukherjee with Delhi chief minister Arvind Kejriwal during the launch of Neta App in New Delhi on Friday. The app allows voters to rate their local politicians and even revise the votes based on their performance. (Photo: PTI)

New Delhi: Former President Pranab Mukherjee on Friday launched the National Electoral Transformation or Neta mobile application, a platform where voters can review and rate their elected representatives and hold them accountable as well.

Observing that a good democracy cannot work without informed voters, Mr Mukherjee said since voters in India have given themselves the Constitution, it was important for them to ensure that their aspirations do not go unheeded.

“India is unique due to its diversity and we are united by that very trait. It is often the case that only time the citizen has interest in the nittie-gritties of democracy is when they come to vote. On the other hand information dissemination has been a largely one-way process when media government and social media inform and they (voters) only play a passive role. With the advent of technology this has completely turned the tables,” Mr Mukherjee said at the launch.

The app is a unique application where people can rate their political representatives and also refer to the points scored by him or her to decide whether to vote for them or not. The former President further said: “We must not forget that we the people have given ourselves the constitution, the government and we thus should make sure that our aspirations do not go unheeded. A good democracy cannot work without informed voters”.

Delhi chief minister Arvind Kejriwal, who was also present, however, had a word of caution. He asked the manufacturers to ensure that app is not let used by politicians to further their agenda.