Khetan and Ashutosh: Tweets told story of fall from grace

Two party leaders had fallen out of favour with CM Kejriwal. 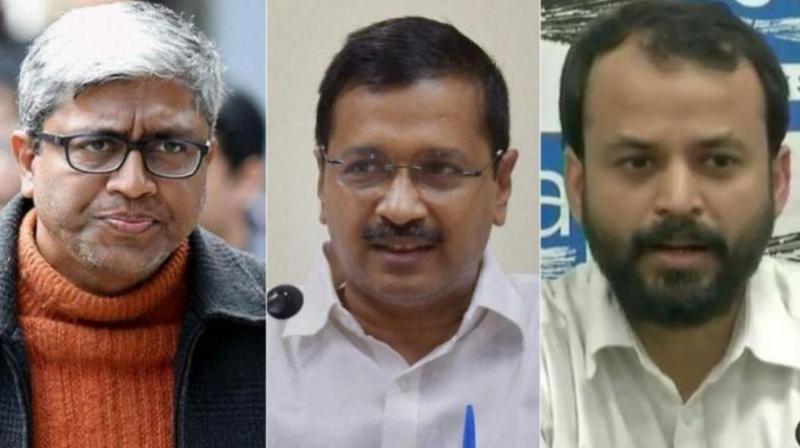 From June 18 to August 15, Mr Kejriwal only retweeted two of Ashutosh’s tweets and three of Khetan, far less than those of other leaders who enjoy his confidence.

New Delhi: If tweets and retweets by the boss are an indication of popularity, Aam Aadmi Party leaders Ashutosh and Ashish Khetan had fallen out of favour with party chief Arvind Kejriwal long before they announced their resignation.

The diminishing importance of the two leaders, both former journalists who made their political debut when they joined the party, and their tensions with the top leadership is reflected in the chief minister’s timeline, reveals an analysis of Kejriwal’s Twitter account over two months.

From June 18 to August 15, Mr Kejriwal only retweeted two of Ashutosh’s tweets and three of Khetan, far less than those of other leaders who enjoy his confidence.

Mr Kejriwal, who has over 14 million followers on Twitter and is the second most followed politician in India after Prime Minister Narendra Modi, is a prolific tweeter and uses the microblogging platform with great effect.

That he chose to virtually ignore his once trusted lieutenants spoke volumes, said party observers.

In the same period, Mr Kejriwal retweeted 102 tweets of his party members, including his deputy in the government Manish Sisodia, 80 tweets of journalists and 11 tweets of leaders from other parties.

This excludes his own tweets and random retweets.

Mr Kejriwal is known to operate his Twitter account himself and is guided by inputs from his social media team, said an AAP leader.

He usually retweets posts that speak highly of the Delhi government’s work and information critical of Prime Minister Narendra Modi and the BJP.

Party sources said the unease between Mr Kejriwal and rebel party leader Kumar Vishwas also came to the fore when the chief stopped retweeting his once trusted lieutenant’s tweets.

Though Ashutosh and Khetan are believed to have resigned on August 15, the latter announced he was quitting earlier this week. Mr Kejriwal is yet to accept their resignations.

When Ashutosh announced his resignation from the party on August 15, Kejriwal responded by saying, “How can we accept your resignation, Sir? Not in this birth. Sir, we all love you.” Ashutosh was a close confidant of Kejriwal’s and a back-door negotiator with several rebels, including its legislators. This was seen as evidence of the importance of the political newbie who had joined the party just before the 2014 Lok Sabha polls.