The two fires in the consecutive months of May and June were said to be caused by a short circuit. 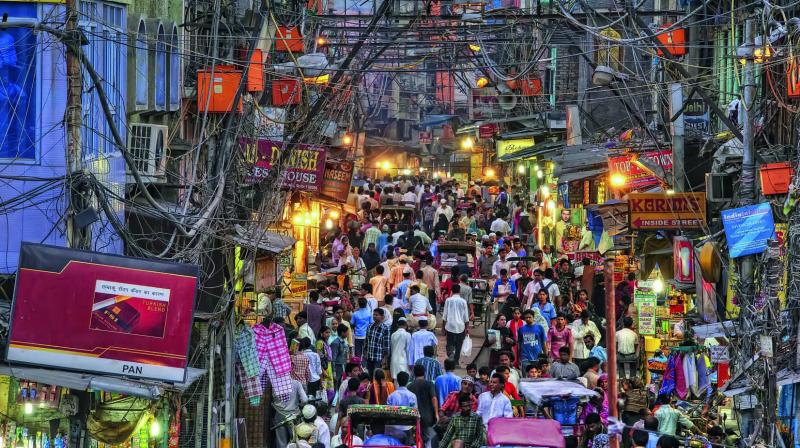 “The number of cables keeps increasing with the number of shops here. The web of overhead wires keeps getting thicker and in turn the power load increases,” said a trader from the area.

New Delhi: Two recent incidents of fire in the congested Chandni Chowk area has put the focus back on the Old Delhi redevelopment project, which has not made much headway till now even after various court orders. While there have been repeated delays since the inception of the project, illegal construction has remained unchecked and encroachments have become the norm.

The two fires in the consecutive months of May and June were said to be caused by a short circuit. “The number of cables keeps increasing with the number of shops here. The web of overhead wires keeps getting thicker and in turn the power load increases,” said a trader from the area.

The authorities had built an underground utility duct in 2014 and more such ducts were planned to shift the power cables underground. While no such duct has come up since then, even the one standing is said to be inadequate in its design.

“The BSES has said that the conduit is not okay as its size is small and no one can get in and out of it for repair purposes, if needed. There is also the problem of slush inside it. Also, the cables require some amount of turning which is not happening currently. So, the conduit doesn’t provide much flexibility,” said a government official who is involved in the project.

He added that in the Shahjahanabad redevelopment plan, a decision was taken to build a central duct to shift all cables like in the case of Connaught Place. However, such kind of space is not available.

“Another problem is that an old DJB sewer line passes through the area and there is a possibility of damaging existing cabl-es if we dig a huge conduit. If we go further, the Metro tunnel is coming in the way,” he said, adding that a “practical solution” is yet to be found.

Encroachment has perennially remained a sore point for Old Delhi with walkways being taken over by illegal vendors and parking. The Delhi HC has passed several orders in this connection, but lack of enforcement by civic agencies has led to most footpaths being occupied by vendors.

He argued that the fines for illegal encroachment are “small” and that the amount has to go up to act as a deterrent. Moreover, designated parking spaces in Old Delhi remain underutilised.