Maken said the decision of Mr Kejriwal was in stark contrast with the “Aam Aadmi” plank he played to secure votes in the Delhi elections. 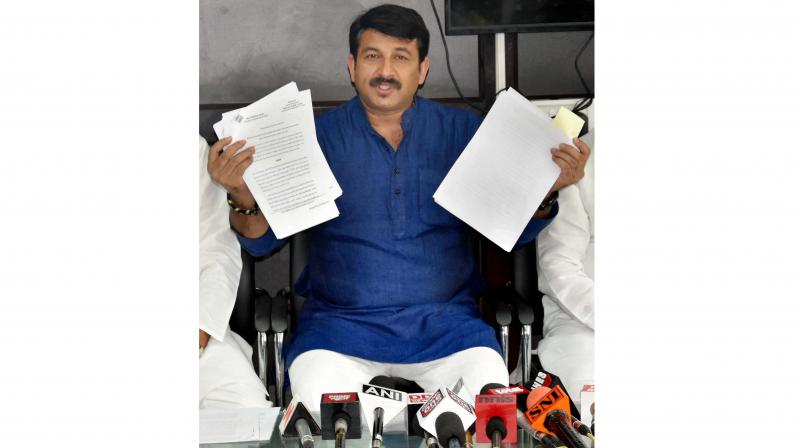 Delhi BJP's president Manoj Tiwari demands immediate dismissal of 21 AAP MLAs who have been charged with holding defacto 'óffice of profit', at a press conference, in New Delhi. (PTI)

New Delhi: The BJP and Congress on Saturday demanded the resignation of 20 AAP MLAs after the Election Commission rejected th-eir plea to drop office-of-profit case against them.

Delhi BJP president Manoj Tiwari said the MLAs who were appointed as parliamentary secretaries in Arvind Kejriwal’s government “have no moral right to continue as legislators”.

The plea before the EC pertains to 21 MLAs, but Rajouri Garden MLA Jar-nail Singh had resigned early this year to contest the Punjab Assembly elections.

In order to give VVIP status to the 21 MLAs, the CM illegally appointed them as parliamentary secretaries and gave them facilities like car, plush office space, staff, etc., Delhi Congress chief Ajay Maken said.

Mr Maken said the decision of Mr Kejriwal was in stark contrast with the “Aam Aadmi” plank he played to secure votes in the Delhi elections.

Mr Tiwari said that he hopes that the poll watchdog will give its final decision on this matter very soon as the case has been pending for the last 14 months.