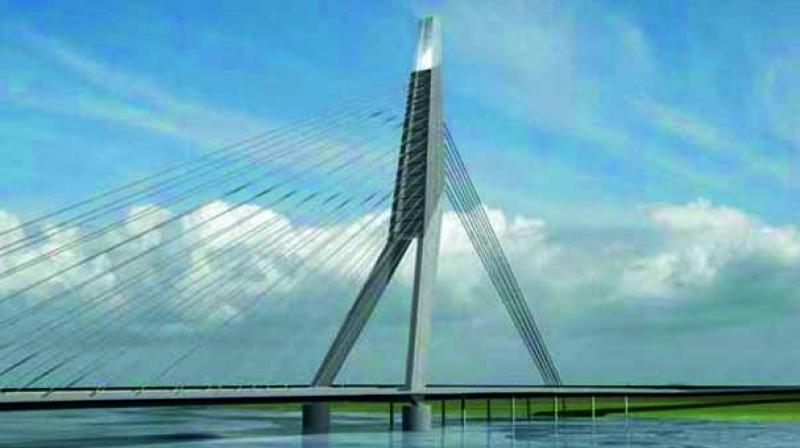 The Signature Bridge in Wazirabad, termed a “white elephant” by the AAP government, was conceptualised by the Sheila Dikshit government in 2004 and is being executed by the Delhi tourism department.

New Delhi: Already running seven years behind schedule, the ambitious Rs 1,500 crore Signature Bridge project in the national capital has hit yet another road block with a “fund crunch” slowing down its construction.

The contractor in charge of executing the project, which is in its last stage, has sought around Rs 250 crores and eight more months for its completion, tourism minister Rajendra Pal Gautam, who visited the site said. “I made it clear that there will not be any further revision of deadline. However, I will look into their demand for more funds and consult experts to see whether it is justified or not. Work has slowed down but I have written to the chief secretary for things to be expedited,” Mr Gautam said.

The Signature Bridge in Wazirabad, termed a “white elephant” by the AAP government, was conceptualised by the Sheila Dikshit government in 2004 and is being executed by the Delhi tourism department. Being built on the lines of the London Bridge, it was meant to be showcased during the 2010 Commonwealth Games. The initial project cost was pegged at around Rs 1,131 crore, which was later revised to Rs 1,575 crore.

“The contractor cited a few reasons behind the delay. The workers had encountered a big chunk of rock under the Yamuna and they had to get machines from abroad to remove it, which took up some time,” he said. Mr Gautam, who recently assumed office after the removal of Kapil Mishra as a minister, emphasised that the demand for additional funds will be considered only if the contractor manages to cite a plausible reason.