The stay was lifted once the HCC submitted its definition of modern heritage. 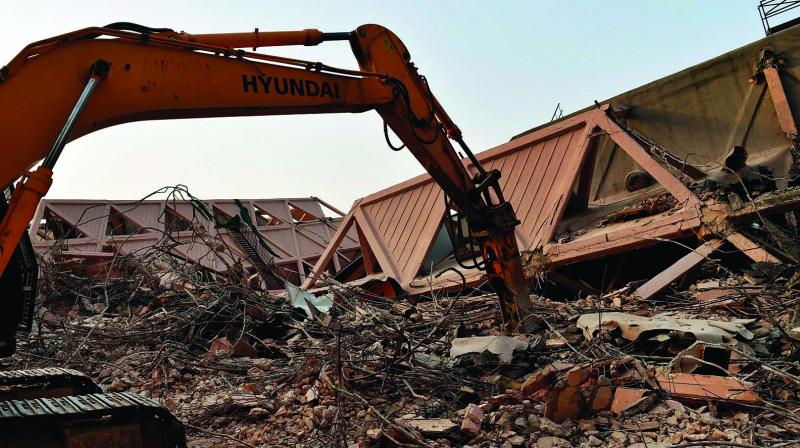 A bulldozer is seen near the demolished Hall of Nations at Pragati Maidan in New Delhi on Monday. Authorities on Sunday night demolished the Hall of Industries and Hall of Nations buildings, constructed in 1972, for setting up of a “world-class” exhibition centre. (Photo: PTI)

New Delhi: Delhi’s iconic Hall of Nations and Hall of Industries at Pragati Maidan, designed by architect Raj Rewal and engineer Mahendra Raj, were demolished on Sunday night to build a modern complex.

The demolition was carried after the Delhi high court dismissed a plea by the architect to preserve the structure on April 20. Earlier in November 2015, the government had announced its plans to turn the Pragati Maidan complex into a “state-of-the-art” exhibition ground. The first step of this process was the demolition of non air-conditioned buildings.

The court’s recent verdict was based on the Heritage Conservation Committee’s (HCC) decision that only buildings aged 60 years or more will be considered for the heritage tag. The Hall of Nations, built to celebrate 25 years of Indian Independence, couldn’t get the protection of being considered as a heritage structure as per the HCC guidelines. Ever since the government announced its plan to redo the Pragati Maidan complex, architectural associations and museums from across the world, including the Museum of Modern Art in New York and the Centre Pompidou in Paris, have written to the government and Union commerce minister Nirmala Sitharaman asking that the buildings be preserved because of their architectural importance. The Indian National Trust for Art and Cultural Heritage (INTACH) had included the demolished structure in its list of “modern heritage” sites.

Mr Rewal, who along with others moved court asking that a stay be put on the demolitions, has said that the ITPO rejected his redevelopment plan for the complex.

The stay was lifted once the HCC submitted its definition of modern heritage.

The ITPO, headquartered at Pragati Maidan, is the nodal agency under the aegis of the Ministry of Commerce and Industry for promoting the country’s external trade and hosts the famous annual trade fair on its premises.

“Seven exhibition centres, spread over an area of nearly 1.5 lakh sqm, will come up at Pragati Maidan. Apart from a world-class iconic convention centre, with a capacity of 7,000 seats will also be built,” an ITPO official said.