The students also submitted a memorandum to an UGC official. 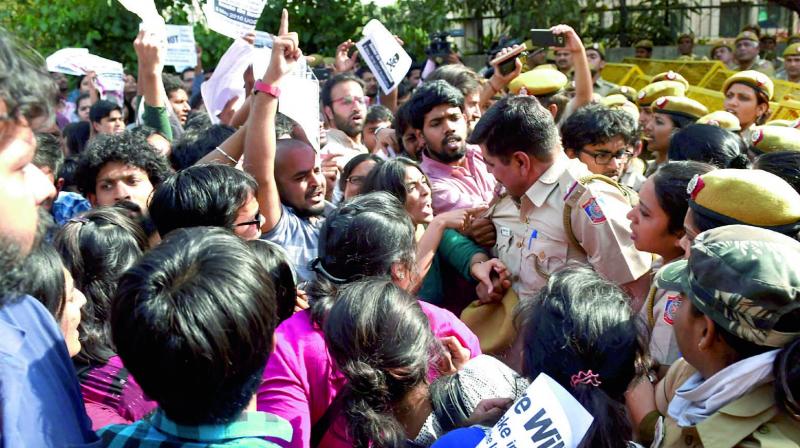 Police personnel and JNU students scuffle during a protest outside the UGC building in New Delhi. (Photo: PTI)

New Delhi: While continuing their strike against the massive seat cut in M.Phil/Ph.D. courses, JNU Students’ Union held a protest outside the UGC on Fridaym, demanding the rollback of the decision to reduce the number of seats. The protest led to the blockade of the ITO crossing, following which the police had a hard time removing the students from the road and resuming normal traffic.

The students alleged that the police “manhandled” them during the protest. “We blocked the road as we were not allowed to meet the UGC chairman. The police manhandled us, but no one was detained,” JNU Students’ Union president Mohit Pandey said.

The JNU Teachers’ Association (JNUTA) also extended support to the students and passed a resolution in their favour at the emergency general meeting on Thursday night.

“Like the students of the university, the teachers feel anger, desperation, and a sense of profound grief that university atmosphere that has given each of us so much has been so spitefully attacked from within,” the JNUTA had said in a statement. JNUSU is planning to hold a bigger protest at the UGC office on March 28 and will also continue their ongoing strike.

The varsity had released its prospectus on Tuesday effecting seat cut in the M.Phil/Ph.D. programmes across courses. “When Prakash Javdekar himself is accepting that the seat cut is due to non-recruitment of faculties, then why students are being punished?” the JNUSU president asked. The students also submitted a memorandum to an UGC official.

“We demand that JNU should be allowed to uphold its institutional autonomy and prepare a robust defence of its existing M.Phil and Ph.D. admission policy along with the Nafey Committee recommendations,” the memorandum stated.