6-month-old among 9 killed in Kirari fire

Health minister Satyendra Jain said the government will also bear the expenses of the injured and will give them Rs 1 lakh. 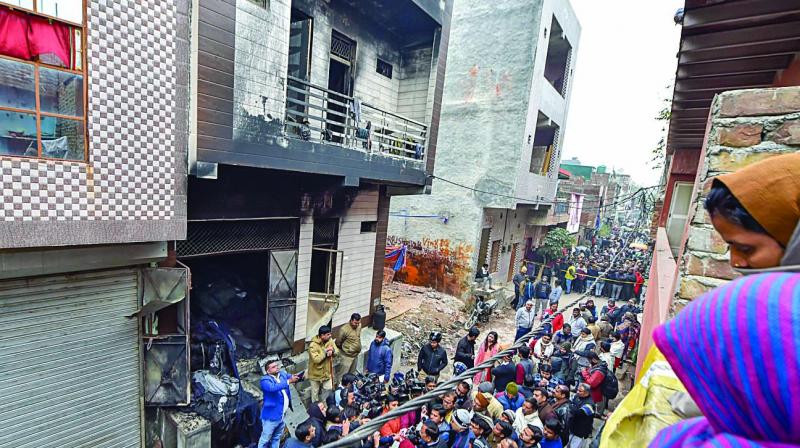 According to a senior Delhi Fire services (DFS) official, a call regarding the blaze was received at around 12.20 am on Monday following which eight fire tenders and DFS teams were dispatched for the spot.

“The blaze was brought under control by 3.50 am. During initial investigation it was revealed that the house had a cloth godown on the ground floor while the two upper floors had residences. It is suspected that a cylinder also blasted on the second floor resulting in a wall collapsing,” said Atul Garg, the chief fire officer.

“The DFS teams recovered three charred bodies and 10 persons were rescued and rushed to a nearby hospital where nine were declared brought dead by the doctors,” said Mr Garg.

“The building had single staircase and there was no fire safety equipment installed in it,” he added.

The cause behind the fire is being investigated. It is suspected that the fire started due to short-circuit, which led to a cylinder blasting and the subsequent collapse of a wall.

Those killed were identified as Ram Chandra Jha (65), the building owner; Sudariya Devi (58); Sanju Jha (36); Guddan; and the family of Udaykant Chaudhary (33) including his wife Muskan (26), their children Anjali (10), Adarsh (7), and six-month-old Tulsi. According to a police official, three people were rescued.

“Pooja (24), her niece Saumya (10), and her three-year-old daughter Aaradhya jumped to an adjacent building to escape the blaze,” said the police official.

Health minister Satyendra Jain said the government will also bear the expenses of the injured and will give them `1 lakh.

Delhi BJP chief Manoj Tiwari, who visited the spot along with local MP Hans Raj Hans and party leader Vijender Gupta, met the affected families and said that people responsible for the tragedy should be punished.