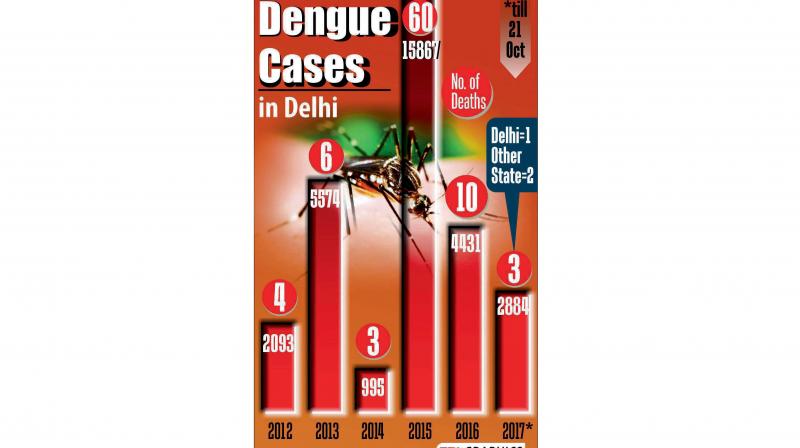 The number of dengue cases reported this month till October 21 stands at 1,077.

New Delhi: At least 650 fresh cases of dengue were reported within the last week in the capital, taking the total number of people affected by the vector-borne disease this season to 5,870.

Of the total 5,870 dengue cases, 2,884 were residents of Delhi, while the rest were from other states.

Earlier, five deaths have been reported, including two at the Lok Nayak Jayaprakash (LNJP) Hospital. However, the South Delhi Municipal Corporation (SDMC), which tabulates data for the entire city has not acknowledged the fatalities at the LNJP Hospital, and kept the official toll at three.

The mosquito-borne disease had claimed its first victim in the city this year when a 12-year-old boy died of dengue shock syndrome at Sir Ganga Ram Hospital on August 1.

Manipuri woman Rhoda Daimai, 26, residing in Sarita Vihar, had died at the Holy Family Hospital in August, while 49-year-old Meena Devi, hailing from Bihar, died of dengue shock syndrome on September 2 at the SGRH, according to the civic authorities.

The number of dengue cases reported this month till October 21 stands at 1,077.

The number of malaria and chikungunya cases recorded here till the third week of October stood at 1,073 and 731 respectively, the report said.

Dengue and chikungunya are caused by the aedes aegypti mosquito, which breeds in clear water. The female anopheles mosquito, which causes malaria, can breed in both fresh and muddy water. The SDMC said mosquito breeding has been reported from 1,92,746 households in Delhi this year till October 14.