Patients forced to live on road outside AIIMS

Another woman, hailing from Rajasthan, came to New Delhi to admit her husband in the AIIMS. 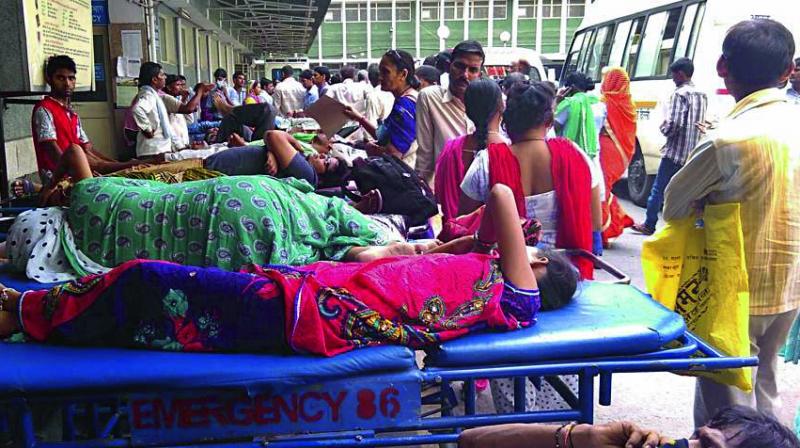 Patients wait to get admitted in AIIMS.

New Delhi: Sumitra Devi came all the way from Motihari in Bihar to get her son treated at All-India Institute of Medical Sciences (AIIMS) in the city.

From June 13, they have been literally living off the road in the scorching heat waiting for their turn among the never-ending queue of patients at the premier hospital.

It is not uncommon for one to see people with their belongings living outside buildings of various hospitals, especially AIIMS, patiently waiting for their turn.  Most of these people belong to states such as Rajasthan, Uttar Pradesh, and West Bengal.

With the mercury shooting up like never before so soon in New Delhi, the worst hit are patients and their family members.

The heat has made many of them seek refuge in places such as metro stations, under the over bridge, especially those coming for treatment in super specialty hospitals such as AIIMS and Safdurjung among others.

Besides being concerned with the heat and inadequate living conditions, Ms Devi said, “I have been here since Wednesday and there seems to be no end to my son’s suffering. All they do is to refer us from one hospital to another.”

She added that her son had to spend two nights outside a public toilet, as no beds were available. “My son is too young to die,” she said, bursting into tears.

Another woman, hailing from Rajasthan, came to New Delhi to admit her husband in the AIIMS.

Living outside the premier hospital, she said, “I have no option but to live outside the hospital. I don’t earn much to afford a comfortable place to live in. I don’t know when they will admit my husband, who is suffering night and day,” she said.

The narrative one gets to hear from people outside AIIMS is full of heart-wrenching stories. Rajiv Briswasi has come with her mother, Rekha, to the hospital to get her treated, but to no avail.

“It will most probably require another 20 days of tests to diagnose the disease, till then we are living in a rented accommodation in Khadar. I have no idea what we will do if the duration of the treatment gets stretched,” said a worried Rekha.

Business around various city hospitals is booming. It is common place to see road-side vendors, especially those selling cold water bottles, outside the premier hospital making brisk business in the hot weather.