Delhi’s 13 per cent Muslim vote to be deciding factor

Issues like sanitation, parking and water continue to be main concerns. 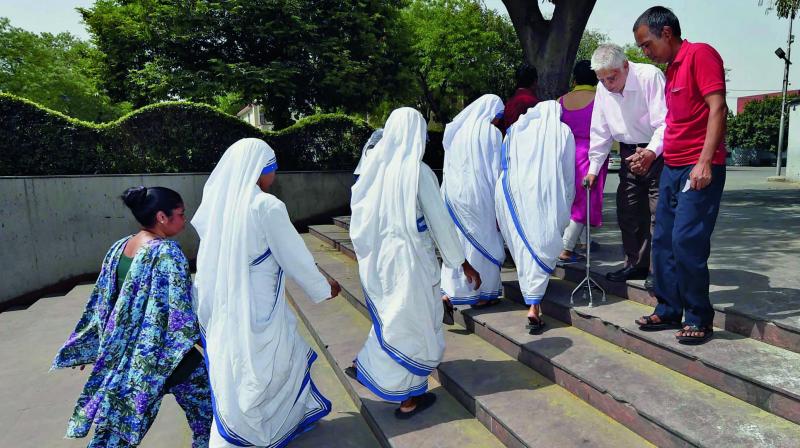 Nuns from The Missionaries of Charity at a polling booth in New Delhi. (Photo: PTI)

New Delhi: The 13 per cent Muslim vote in the capital could be the deciding factor in many wards. Many members of the minority community said that they went with Congress over AAP.

“As BJP is not the first traditional choice for us, the only option left was among the Congress and the Aam Aadmi Party. Many others and I voted from my area for Congress,” said Mr Niyaz Mathe, a resident of Jamia Nagar.

Mr Mathe said that he had voted for AAP in Delhi Assembly elections in 2015 but was not impressed by the work done by the party’s MLA till now.

He added that in his area there is no dearth of issues, they range from no water supply, lack of MCD schools, and waterlogging during monsoons and has voted keeping in mind these problems.

“Most of the votes from this area are going to be divided among the Congress and the AAP, but Congress has an upper hand,” he said. Another voter, Mr Nadeem Akhtar, a resident of Batla House’s ward number 104, said that while there is improvement in water situation in his area, after the AAP came to power, the candidate selected by the party from his area “does not seem credible enough.”

“Congress candidate has more chance as he seems more mature,” he said.

The community members said that issues like sanitation, parking, and water continue to be main concerns.

In the 2015 assembly elections, Muslims voted en masse for AAP, but the party seems to have lost some of its vote bank.

Mr Javed Ullah of N Block of Abul Fazal Enclave in Shaheen Bagh’s ward number 102, said that he and many others from his colony voted for SP.

He added that the sitting councillor are also from the SP and the party hasn’t given him the ticket again because of loss of reputation and has instead fielded a new candidate.

The ward comes under Okhla constituency which is represented by AAP in Delhi Assembly and Mr Ullah, who is an electrical engineer by profession, said that while the party promises free water supply in Delhi, it hasn’t been able to solve Okhla’s shortage of portable water.

In a departure from its move in Uttar Pradesh Assembly elections, even BJP has fielded Muslim candidates in five wards. While many Muslim voters said that issues like triple talaq did not affect voting patterns in the election, BJP’s candidate from Zakir Nagar ward in South East Delhi, Mr Kunwar Rafi Uzzaman, said that the issue is “definitely helped” BJP in the elections.