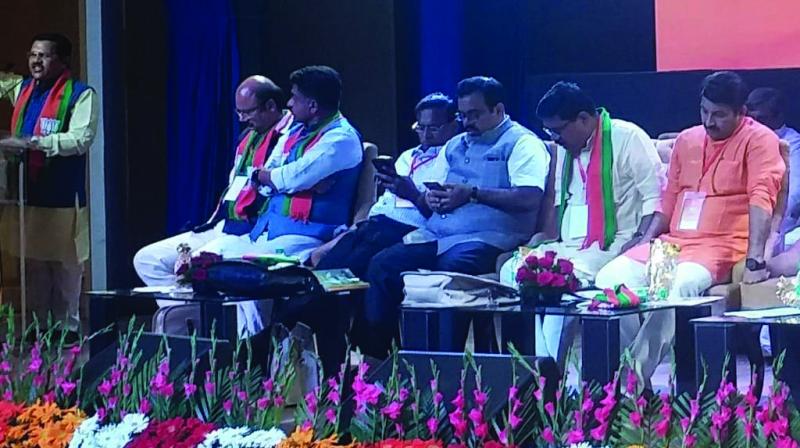 New Delhi: BJP national general secretary Anil Jain on Saturday came down heavily on the party’s city unit for its failure to return to power since 1998.

Addressing the Delhi BJP executive meet at Dr Ambedkar International Centre, Dr Jain said that they (Delhi BJP) feel ashamed for not returning to power in 20 years. A senior Delhi BJP office-bearer said Dr Jain also pointed out that leaders in the pa-rty unit, instead of working on ground among people, are busy in the chaplushi of senior or central leaders.

According to a Delhi BJP insider, Dr Jain advised the party and its leadership to improve its functioning so that it can ret-urn to power in the national capital when the next Assembly election is held.

A member of the Delhi BJP executive told this newspaper that due to non seriousness, the whole purpose of the two-day meet was lost.

“When Delhi BJP in-charge Shyam Jaju was speaking, the senior leaders sitting on the stage were seen busy with their mobile phones. Their non serious attitude towards Mr Jaju’s address sent a wrong message among the cadres sitting in front of the stage,” he added.

The two-day Delhi BJP executive meet will conclude on Saturday evening. The prevailing political situation and the ongoing sealing drive on the direction of the Supreme Court appointed monitoring committee was discussed in the meeting. Briefing the media about the executive meet, Delhi BJP president Manoj Tiwari said that Saturday’s meet had extensive discussion on the ongoing sealing campaign in Delhi and the house unanimously condemned the misuse of the court’s orders. It also denounced the pick-and-choose method of sealing adopted by the monitoring committee. The Delhi BJP executive meeting resolv-ed to strongly oppose this irrational sealing.

“It is sad that at several places in Delhi colossal illegal constructions have been done on government lands, including at Okhla, where the illegal construction mafia has encroached upon the Yamuna bank too. It is unfortunate that the monitoring committee remains occupied in targeting small commercial establishments and neglects the massive structures raised on public land,” said Mr Tiwari.

“In the matter of massive constructions at Okhla in the river belt, even the Delhi high court and NGT have taken cognisance and have passed orders for demolition, but the monitoring committee continues to remain ignorant,” said Mr Tiwari.