Infighting in Delhi unit forces central leadership to step in. 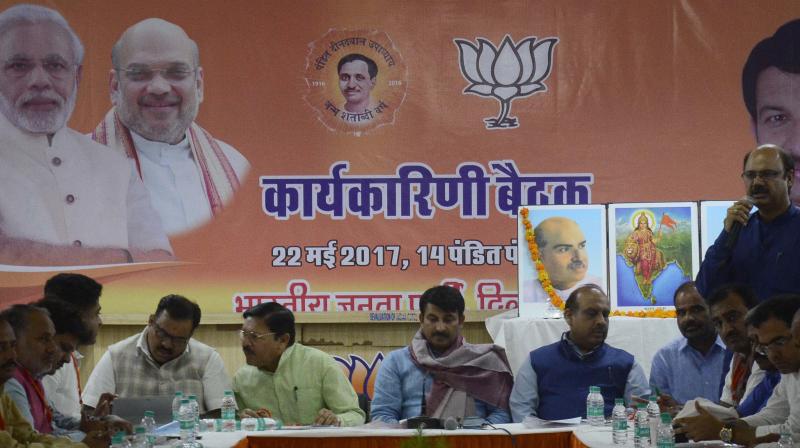 New Delhi: After intervention of central leadership, which is said to be unhappy over the ongoing infighting between Delhi BJP president Manoj Tiwari and Union minister Vijay Goel, the two leaders met on Monday afternoon to sort out their differences.

The meeting between the two is seen as a major political development within the state BJP unit on the day when the party’s two-day state executive meeting started to take stock of the future course of action to corner AAP in Delhi.

BJP sources said that central leadership has shown its displeasure over difference and infighting in the state unit especially between Mr Tiwari and Mr Goel, which has came out in open. “National general secretary (organisation) Ramlal directed both the leaders to sort out the differences at the earliest. Mr Ramlal had a word with both the leaders and following his direction Mr Tiwari went to Mr Goel’s residence and discussed the recent development that created differences between both the leaders,” he added. Confirming the development, both Mr Goel and Mr Tiwari told this newspaper that they met sorted the differences. “Yes, we met and their was some misunderstanding that has been cleared,” said Mr Goel.

BJP national vice-president and party’s state unit incharge Shyam Jaju said that the BJP is cadre-based party, where such “behaviour” is not tolerated, and discipline is supreme. “BJP is world’s largest party and there may be some difference of opinion among some leaders or workers, but that has been sorted. There is nothing extra to read between lines and everyone talked about expansion of party during the executive meet,” added Mr Jaju who was present in the state executive meeting.

Difference between two leaders came out in the open after May 16 a felicitation function for the newly elected BJP councillors in three civic bodies of Delhi hosted at Mr Goel’s official residence.