For the BJP, it's a matter of prestige. The Congress, buoyed by victory in Punjab, is looking for a revival in Delhi politics. 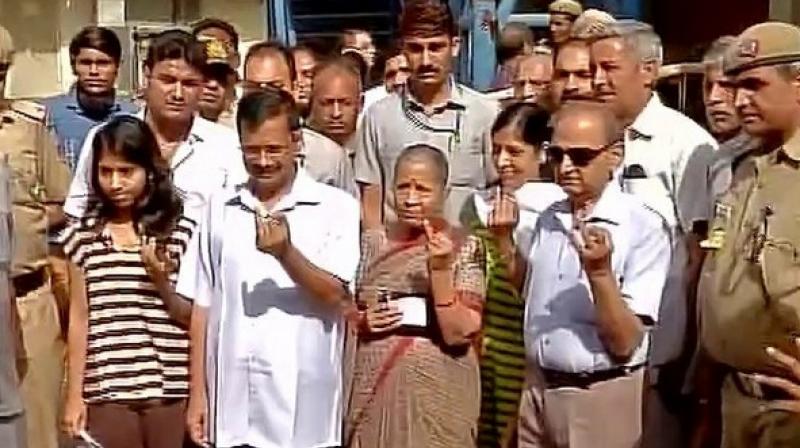 The polling is being conducted for 272 wards of three MCD civic bodies and over 2,500 candidates are in the fray.

After losing in this month's Assembly by-polls and the February elections in Punjab and Goa, the municipal polls will be an acid test for Arvind Kejriwal-led Aam Aadmi Party (AAP) Government in Delhi.

Kejriwal's former party colleague Yogendra Yadav, who now leads Swaraj India, wrote an open letter to the Chief Minister and challenged him to win at least 50 percent of seats in the civic polls or step down.

Even as the Swaraj India and the Janata Dal (United) look to expand base beyond Bihar and Jharkhand, the Bharatiya Janata Party (BJP), the AAP and the Congress have roped in top leaders and done whatever they could to woo the voters.

For the BJP, it's a matter of prestige. The Congress, buoyed by the Capt Amarinder Singh-led victory in Punjab, is looking for a revival in Delhi politics.

For the first time in the MCD elections, the None Of The Above (NOTA) option will be available and the elections will be held after the latest delimitation exercise that has restructured the civic wards.

The Delhi Election Commission has set up over 13,000 polling booths, out of which over 3,000 have been identified as sensitive while around 1,500 as hypersensitive.

Nearly 57, 000 police personnel have been deployed to ensure free and fair polls in the national capital.

To avoid any untoward incident during the elections, the Delhi Government has ordered dry day to be observed in the national capital on the polling day.