Congress chief Ajay Maken earlier on Sunday said that the BJP-led corporation has failed to live up to its expectation in last ten years. 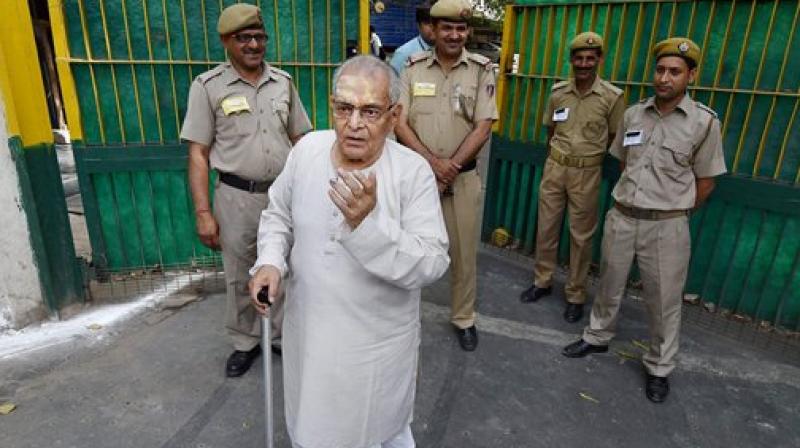 An elderly person leaves after casting his vote for MCD elections at a polling station in New Delhi on Sunday. (Photo: PTI/Manvender Vashist)

New Delhi: Asserting that Delhi has witnessed the worst during BJP's tenure in the MCD, former chief minister Sheila Dikshit on Sunday expressed optimism that the people would vote for Congress in the civic polls this time.

Claiming that the BJP has done nothing for the national capital in the last ten years, Dikshit said she is hoping for better results for the Congress in the civic polls.

"We are very hopeful about these polls. And I am sure that we will perform much better this time. People are really angry with the BJP as there is no cleanliness, workers don't get their pay," Dikshit said.

"The BJP has done no work in the national capital. Delhi has witnessed the worst under the BJP's rule (in MCD). I am sure the people of Delhi will vote after putting a lot of thought. The BJP will not get as many votes it is expecting," she added.

Delhi Congress chief Ajay Maken earlier on Sunday said that the BJP-led corporation has failed to live up to its expectation in the last ten years.

The polling for the three Municipal Corporations of Delhi began at 8 am on Sunday and will end at 5:30 pm Over 2,500 candidates are in the fray.

Over 1.3 crore people are eligible to exercise their voting rights and of them more than 1.1 lakh are first-time voters. More than 2,500 candidates are in the fray.

The civic polls will witness a triangular contest involving three major parties - the AAP, BJP and the Congress. Interestingly, None of the Above (NOTA) option has been made available for the first time in MCD elections.