Opinion polls have so far indicated that the BJP is ahead in the MCD polls. 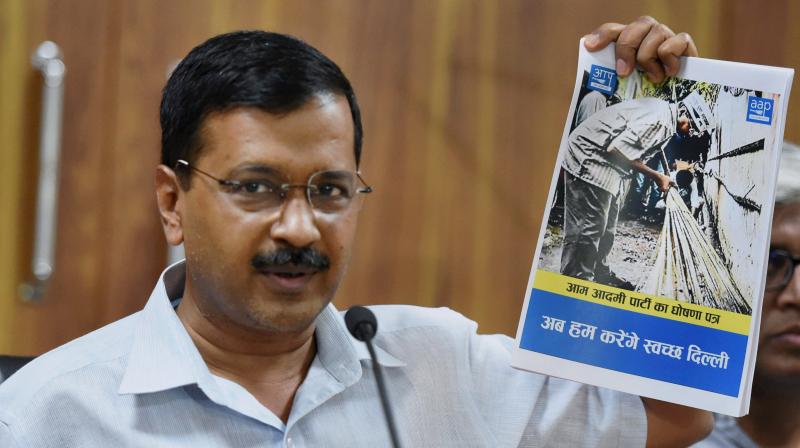 New Delhi: After Uttar Pradesh Assembly elections, winning Delhi’s municipal polls is crucial for the BJP not merely to preserve the so-called “Modi wave”, but also to consolidate its position in the forthcoming state elections. Gujarat and Himachal Pradesh are scheduled to go to polls later this year.

Delhi goes to polls today. Its 1,32,10,206 voters will pick councillors for 272 wards spread across three municipal corporations. The counting of votes will take place on April 26. Opinion polls have so far indicated that the BJP is ahead in the MCD polls.

The BJP’s recent stunning performance in Odisha and Maharashtra civic polls didn’t just bolster the party’s image, but also put the entire Opposition on the back foot.

“Shiv Sena, which had been gunning for us, has softened after the Maharashtra civic poll results, and the Biju Janata Dal is completely rattled after our victory in Odisha civic polls,” a senior BJP functionary said and added, “We desperately need to win Delhi MCD polls after our successive defeats in 2013 and 2015 Assembly polls.”

Importance of the MCD polls for the BJP was evident when party chief Amit Shah deployed heavyweights, including Union ministers Nirmala Sitharaman and Jitendra Singh, along with party vice-presidents Shyam Jaju and Vinay Sahasrabuddhe, also a Rajya Sabha member, for campaigning.

The MCD polls are also crucial for Delhi BJP president Manoj Tiwari as the outcome is expected to have a direct bearing on his political fortunes.

A senior party functionary said that if BJP won the MCD polls, Mr Tiwari would “either emerge as the chief ministerial candidate for the next Assembly polls in Delhi or could be given a Cabinet berth.”

However, if the party lost the MCD polls, Mr Tiwari could be “removed,” the functionary observed.

The BJP’s major focus has been on the Poorvanchali voters, who dominate nearly 20 of the 70 Assembly berths in Delhi.

Poorvanchalis, a traditional Congress vote bank, had shifted to AAP during the 2013 and 2015 Assembly polls in Delhi.

For AAP, which has been going through an existential crisis after its electoral rout in Punjab and Goa, desperately needs to win the MCD polls.

In an interview to an online channel, Delhi’s deputy chief minister Manish Sisodia reportedly admitted that MCD polls “will be a referendum on AAP’s performance in Delhi.”

If AAP loses the MCD elections, the blow could virtually finish party supremo Arvind Kejriwal’s ambition to emerge as a key player in the national political arena. After its victory in the 2015 Assembly polls, Mr Kejriwal was rapidly emerging as the rallying point for regional players like Trinamul Congress.

Trinamul Congress chief Mamata Banerjee and Mr Kejriwal, in fact, were trying to bring all the anti-BJP and anti-Congress forces under one umbrella. But AAP’s defeat in Punjab and Goa virtually perished Mr Kejriwal’s dream run and Ms Banerjee is now looking towards BJD chief Naveen Patnaik.

Like AAP, it’s a battle for survival for the Congress as well. The party, which has been losing one election after another, has pinned all its hopes on Delhi’s MCD polls. The party intends to have a major celebration if it wins the MCD polls.

Adopting a cautious approach, the Congress has refrained from using party vice-president Rahul Gandhi for campaigning. However, desertion and dissension continued unabated in the Congress with its top leaders, particularly Arvinder Singh Lovely, joining the BJP.