BJP workers sore over special treatment being given to celebs. 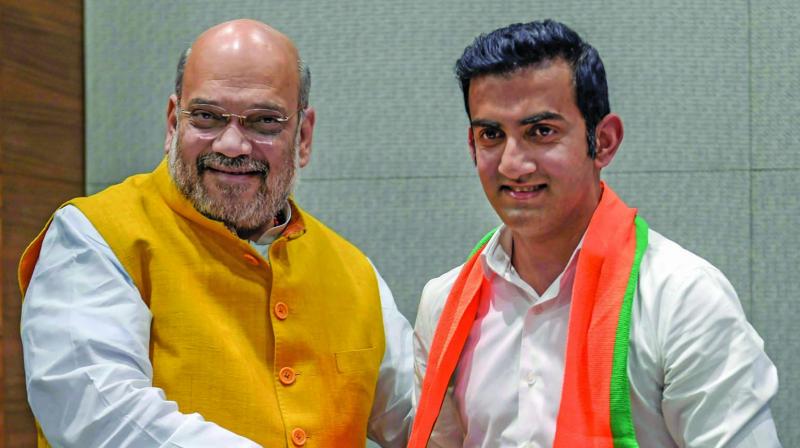 Later on, Mr Gambhir tweeted: “I have joined BJP to serve the country with right intent and honesty. I hope through this I can make some meaningful difference to the lives of my people”.

Party insiders told this newspaper that Ms Lekhi raised the issue of celebrities joining the party and said workers should not be ignored, suggesting  that priority should be given to dedicated leaders and workers in ticket distribution.

Delhi BJP’s election committee, meanwhile, in its meeting on Friday, shortlisted three names each for the seven Lok Sabha seats in the national capital, amid protests over celebrities joining the party to get tickets for the polls. Mr Gambhir’s name did not figure in the list as he joined the party when the whole exercise by the state unit was over. All the seven sitting party MPs’ names have been included in the list which will be sent to the central election committee for final selection of party’s official candidates. It is learnt that for the New Delhi seat, besides sitting MP Meenakshi Lekhi, Delhi BJP in-charge and national vice president Shyam Jaju, and Delhi BJP general secretary Rajesh Bhatia have been shortlisted.

For the Chandni Chowk seat, sitting MP and Union minister Harsh Vardhan, leader of opposition in Delhi Assembly Vijender Gupta and Sudhanshu Mittal have been shortlisted.

For East Delhi, Mahesih Girri (MP), Aman Sinha and Delhi BJP MLA O.P. Sharma have been shorlisted. Manoj Tiwari’s name is in the list of probables for North East Delhi seat, currently held by him.

From West Delhi, sitting MP Parvesh Verma, Kamaljeet Sehrawat and Pawan Sharma have been shortlisted. Ramesh Bidhuri (MP), Ram Veer Bidhuri and Brham Singh Tanwar were short listed for south Delhi while Udit Raj (MP), Ashok Pradhan and Anita Arya have been shortlisted for North West. The list of probables is likely to be discussed by BJP’s central election committee which will take a final call.