Scores of travellers, including ambulances, were stuck as a deadlock prevailed on the busy NH-24, bringing the vehicular traffic to a grinding halt. 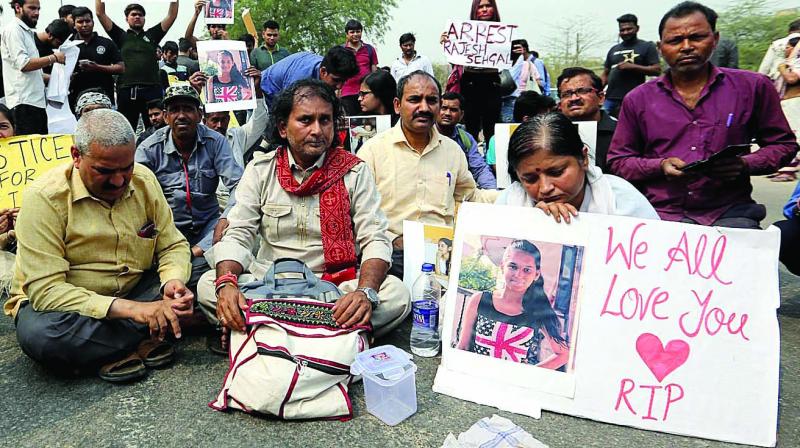 Parents of a Class 9 student who had committed suicide allegedly after failing in papers protest outside a private school in Mayur Vihar in east Delhi on Thursday, demanding a CBI probe. (Photo: GH Jha)

New Delhi: Commuters had a harrowing time as traffic came to a grinding halt near east Delhi’s Mayur Vihar, where the parents of a Class 9 girl, who committed suicide at her Noida residence on Wednesday, protested outside Ahlcon Public School, blocking traffic for hours at the busy intersection.

Scores of travellers, including ambulances, were stuck as a deadlock prevailed on the busy NH-24, bringing the vehicular traffic to a grinding halt.

The agitated parents of the deceased and a large number of parents came out in protest against the school demanding a CBI probe into the matter. The group of people blocked the Delhi-Noida road in protest disrupting commuters.

According to police officials, both the stretches on the Delhi-Noida road and NH 24 were forced shut. The Delhi traffic police had to divert traffic, but still a large number of vehicles were queued up. A senior official of the Delhi police said that the family members ignored repeated requests to clear the road.

The parents of the girl the alleged that she committed suicide after she was failed by the school. The family said that their daughter had told them about the harassment she was being subjected to by two teachers.

They have claimed that she was “sexually harassed” by two teachers.

Following the allegations by the parents of the girl, two teachers and the principal were booked.

Ishika (16) was found dead at her home in Noida on Tuesday evening. The FIR, which was registered originally, contained charges of criminal intimidation and abetment to suicide against the principal of Ahlcon Public School, Dharmendra Goyal, science teacher Neeraj Anand and social science teacher Rajiv Sehgal.