Many protesters were also carrying posters and banners of Mahatma Gandhi and B.R. Ambedkar. 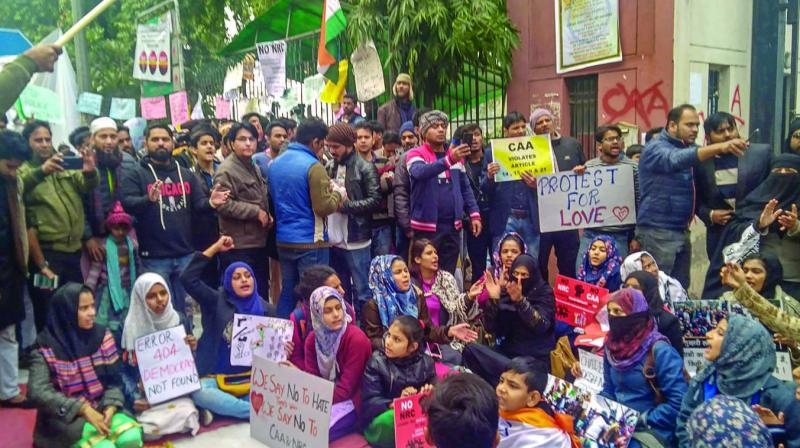 Protesters hold placards as they raise slogans during a demonstration outside Jamia Milia Islamia. (Photo: PTI)

New Delhi: Thousands of people including students, lawyers, and locals continued their protest outside Jamia Millia Islamia against the contentious Citizenship Amendment Act (CAA) and National Register of Citizens (NRC) for the ninth day on Saturday.

Braving the winter chill, the protesters started assembling outside the campus gate from 11.00 am onward and they were later joined by several university alumni.

Many protesters were also carrying posters and banners of Mahatma Gandhi and B.R. Ambedkar.

The number of protesters swelled by the evening and one could see many female students requesting people not to use any abusive language. “We are peaceful citizens of this country. We have no intention to indulge in any violence. Our protests will continue till the new law — which is bound to divide the country on religious lines — is scrapped,” said Aysha Renna, a student of Jamia.

Shaheen Abdulla, a journalism student at the varsity, said that a joint coordination committee (JCC) of students and some university faculty had been formed to organise their future protests. He, however, said that students had decided not to involve any politician in their peaceful protests.