They called upon the government to provide incentives to farmers so that they dispose of stubble in a more scientific manner. 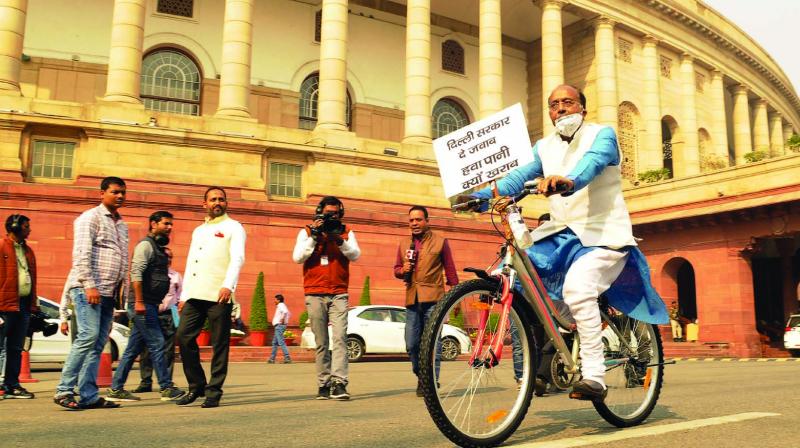 New Delhi: Even as the discussion on air pollution continued for the second day on Thursday in the Lok Sabha, with Union environment minister Prakash Javadekar scheduled to give a reply on Friday, members cutting across party lines said that stubble burning alone cannot be blamed for rising levels of air pollution in and around Delhi.

They called upon the government to provide incentives to farmers so that they dispose of stubble in a more scientific manner.

Some members also suggested that minimum support price should be extended on produce like pearl millet (bajra) and sunflower as after harvesting they do not leave stubble.

Congress member Shashi Tharoor said the government should follow a legislative approach to implement the national clean air programme. AAP member Bhagwant Mann and Apna Dal leader Anupriya Patel said that farmers should not be blamed for stubble burning, considered as one of the main reasons for air pollution in the national capital region, and demanded that they should be encouraged to grow crops which do not leave stubble.

They also said that the government should explore ways of using stubble in biogas and cardboard manufacturing to encourage farmers to sell it.

Mr Mann said farmers grow crops which leave stubble as they get minimum support price (MSP). If the government announces a reasonable MSP on pearl millet and sunflower, then farmers would be encouraged to cultivate it, Mr Mann, who represents Sangrur in Punjab, said.

Ms Patel said stubble can be used for biogas and cardboard manufacturing and farmers should be encouraged to sell it.

Speaker Om Birla said climate change was the most widely debated topic in the world.

The Rajya Sabha on Thursday discussed the issue of rising pollution in the city. According to a report tabled by Union environment minister Prakash Javadekar, the national capital’s air quality has improved in the last three years.

Mr Javadekar said a high-level task force, set up under the chairmanship of principal secretary to the Prime Minister in November 2017, is closely monitoring the implementation of measures related to management of air pollution in Delhi-NCR.

The environment ministry also launched the national clean air programme (NCAP) in January to tackle the problem of air pollution in a comprehensive manner with targets to achieve 20 to 30 per cent reduction in PM 10 and PM 2.5 concentration.

Congress Rajya Sabha MP Pratap Singh Bajwa said health minister Harsh Vardhan recently tweeted that people should eat carrots for protection from pollution related harm to health. “They are asking us to eat carrots. Are we goats,” was the query of a Congress member in Rajya Sabha on Thursday as he took a dig at Mr Harsh Vardhan.

According to the India Meteorological Department, very low wind speed and high humidity due to shallow fog in the morning led to the accumulation of pollutants. The air quality is expected to remain severe on Thursday and Friday.

According to the government’s air quality monitoring and forecasting body, SAFAR, relief is expected only on Saturday with an increase in wind speed.