5 gangsters held after shootout in Dwarka

Around 30 rounds were fired during the shootout, after which the police managed to round up and arrest the criminals. 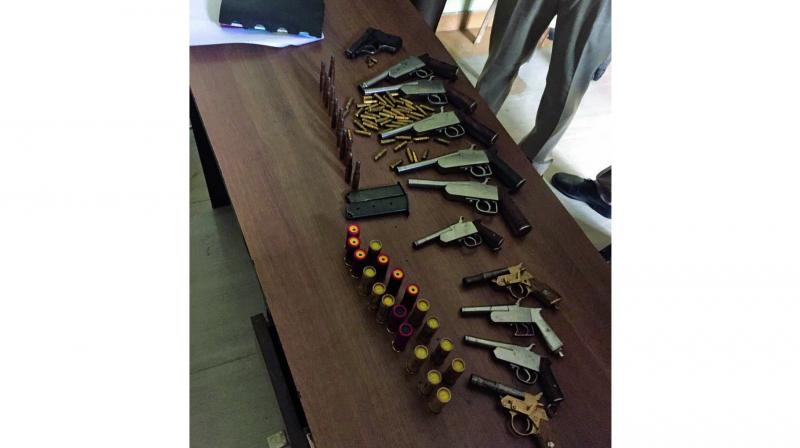 New Delhi: Five suspected criminals were arrested following a brief encounter with the police near Dwarka Mor Metro station in Southwest Delhi on Tuesday. The gang members opened fire when the joint team of Delhi and Punjab police intercepted them near the Metro station this morning.

The joint police team recovered a large cache of weapons from five persons who were arrested from a house near Dwarka Mor Metro station in Southwest Delhi after the shootout on Tuesday. The incident took place between 11 am and 12 pm.

Around 30 rounds were fired during the shootout, after which the police managed to round up and arrest the criminals.

“Several rounds were fired, but no one was injured. Five people have been arrested,” said the Delhi police spokesperson. The police found a huge cache of arms on them — 12 revolvers and 100 cartridges. The operation against the suspected criminals was initiated by the Punjab police, who approached their counterparts in Delhi on Tuesday morning. The local district police assisted them in the operation.

“The suspects were wanted by the Punjab police for murder, attempt to murder, and carjacking,” said a senior police officer. The officer said the suspects were hiding on the second floor of a building, which has offices on the ground floor and flats on the upper floors. The police said the accused tried to make a Bollywood-style escape with the help of a makeshift ladder by hanging bed sheets tied to each other from the back window of the second-floor hideout. A senior police officer said criminal gangs from Uttar Pradesh’s Mewat and adjoining areas have always been active in Delhi, particularly in the southern and outer parts of the city. They have committed some of the most gruesome crimes against the police and the public and have caused a huge loss of life and property, said DCP P.S. Kushwah.

Though five people have been caught, the police is still combing the area to look for one or more suspect who might have escaped.