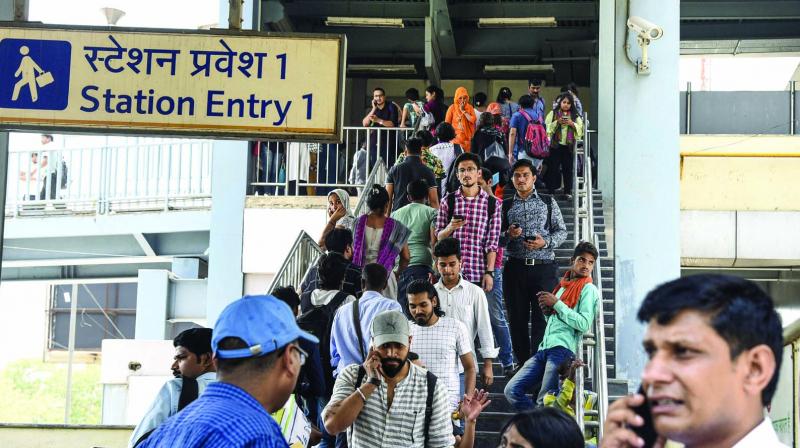 Passengers coming out from Chattarpur Metro Station after services got affected due to technical glitches on Tuesday. (Photo: PTI)

New Delhi: A technical glitch disrupted services on Delhi Metro’s Yellow Line for at least four hours on Tuesday, leaving thousands of passengers stranded on the road and traffic snarls all the way from Gurgaon to New Delhi.

Trains on the line that connects Huda City Centre in Gurgaon to Samaypur Badli in the city, running a distance of 49 km, stalled at 9.27 am and normal services were not resumed till after 1.28 pm.

Services were hit due to the breakdown of the overhead wire (OHE) at Sultanpur station, midway between Gurgaon and Delhi, leading to power supply tripping in the section, DMRC (Delhi Metro Rail Corporation) officials said.

There was no train movement between Sultanpur and Qutub Minar stations, two stations away from each other with Chhattarpur in the middle. Two maintenance teams of DMRC technicians, comprising of 16 officials, worked to rectify the problem.

There was no train movement between Sultanpur and Qutub Minar in the morning rush hours. Passengers of the two trains, which were passing through the section at the time, were asked to de-board and services were resumed by running trains in short loops, officials said.

After nearly three-and-a-half hours of chaos, end-to-end services were partially restored with trains plying between Qutub Minar and Sultanpur stations with lower frequency. In the next 30 minutes, normal services resumed, said the official.

With the lifeline that connects the national capital to the satellite town of Gurgaon severed, there was mayhem on the roads and on the tracks.

Some people got off the train and had to walk on the track at Qutub Minar station and others were stuck inside coaches, sending out tweets asking for the air-conditioning to be put on.

There were the old and young, men and women, some with children and others with bags, knocking at car windows and searching for cabs, auto-rickshaws, or any vehicle that could give them a ride.

Crowds swarmed the stations with people spilling on to the stairs and the road.