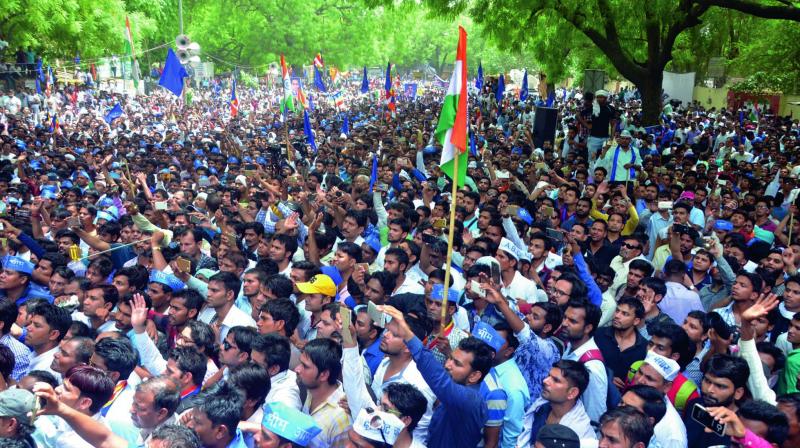 People from the dalit community take part in a protest rally at Jantar Mantar in New Delhi on Sunday. (Photo: Pritam Bandyopadhyay)

New Delhi: Thousands of dalit rights activists, led by Bhim Army, on Sunday gathered at the Jantar Mantar to raise their voice against the caste-based violence in Saharanpur city of Uttar Pradesh. Around 5,000 people participated in the protest despite being denied permission by the Delhi police. The protesters demanded that cases be registered against those who had perpetrated violence against dalits on May 9.

They also demanded that the affected families be awarded a compensation of Rs 10 lakh. Bhim Army founder Chandrashekhar, who is accused of sharing an objectionable video on social media and disrupting the communal harmony in Saharanpur, was also present at the event.

The activists also demanded that the FIRs lodged against Chandrashekhar and other dalit activists be cancelled and a judicial probe be initiated into the incidents of clashes at Saharanpur. Meanwhile, the police stepped up security at the protest site. However, the event went off peacefully, police said. “The protesters had initially said that the gathering would be close to 50,000, which is why the permission was denied,” said a senior police officer.

Clashes had erupted on May 5 in Saharanpur’s Shabbirpur village after some of its dalit residents refused to allow a procession by Thakurs to mark the birth anniversary of Rajput king Maharana Pratap. Members of the dalit community had then tried to hold a “mahapanchayat” on May 9 in Gandhi Park in the city to demand compensation and relief to those affected in the May 5 clashes but their request was turned down by the administration, following which they took to the streets. In the violence that followed, dalit protesters allegedly set fire to a police post and over a dozen two-wheelers in several areas of the city.

Also, over 500 Krantikari Yuva Sangathan (KYS) activists from Delhi, Haryana and Western Uttar Pradesh also extended their support to the dalit community of Saharanpur by participating in the protest. “Casteist terrorists who have since ancient times reduced dalits to inhuman tasks, now are parading the country to further dehumanise their living conditions. It shows the real state of affairs in our country,” the activists said.