Celebrities urge people to come out and vote

For the first time in MCD elections, ‘None Of The Above (NOTA)’ option will be available. 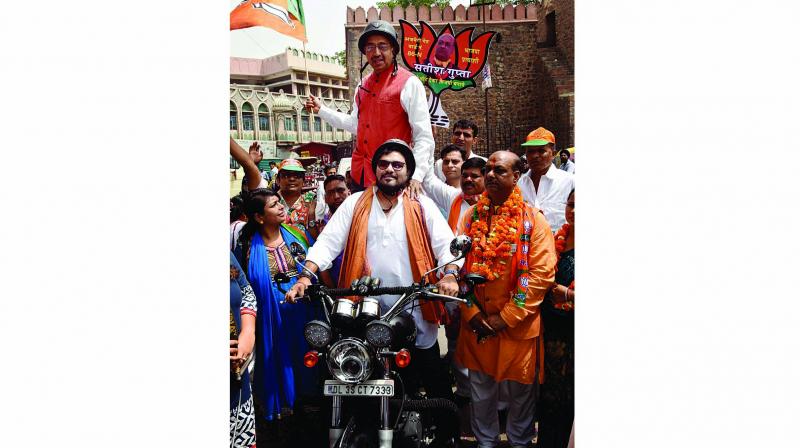 New Delhi: The voter awareness campaign for the municipal polls has received a celebrity quotient with cricket legend Kapil Dev, author Chetan Bhagat and Bollywood actress Huma Qureshi exhorting people of Delhi to come out and vote in the municipal polls on Sunday. The run-up to the local body elections in the city is making national headlines and the State Election Commission is raising awareness among the electorate with a ‘Dhakad’ campaign.

“We have roped in five celebrities, Kapil Dev, Gautam Gambhir, Chetan Bhagat, Huma Qureshi and Taapsee Pannu of Pink fame, for our ad campaigns. The publicity material is already out and we have put it up in Delhi Metro and public places and published in newspapers as well,” a senior official said. The Commission has already been running a campaign with a tagline, “Voter Dhakad Hai (voters are awesome)”, to build up awareness. “Apart from our ‘Dhakad’ print and outdoor campaign, which has really attracted a lot of eyeballs, we are running ad jingles on radio and spots on TV.

“On April 22 and 23, we will bring out a combined hoarding and poster, in which all five celebrities would be seen in one frame. On these two days, we will be disseminating additional information to people about voting and other related details,” he said.  The Commission has come with a personified finger character to exhort voters to come out and exercise their franchise. “Because of political dynamics involved and some controversies, local bodies elections have assumed a much wider canvas. We want people to also get involved in the electoral process,” the official said.

“The MCD polls in 2012 had seen a turnout of 54 per cent,” he said. The Commission said it is preparing for the polls as per schedule. This would be the first civic poll after the latest delimitation which has redrawn the civic wards. As per the new delimitation exercise, based on the 2011 census, each ward now has an average of 60,000 people with an estimated 40,000 voters. Delhi has 70 Assembly seats and before the delimitation, every constituency had four wards, but now it ranges from 3-7.

The erstwhile unified MCD was trifurcated in 2012 into North, South and East Municipal Corporations. While NDMC and SDMC have 104 wards each, EDMC has 64.

For the first time in MCD elections, ‘None Of The Above (NOTA)’ option will be available. The Generation-1 electronic voting machines (EVMs) are to be used for the MCD elections, which the Commission has described as “foolproof”.