Delhi most polluted capital in the world in 2021: Report

In 2021, none of the cities in India met the prescribed World Health Organization air quality standards, report shows 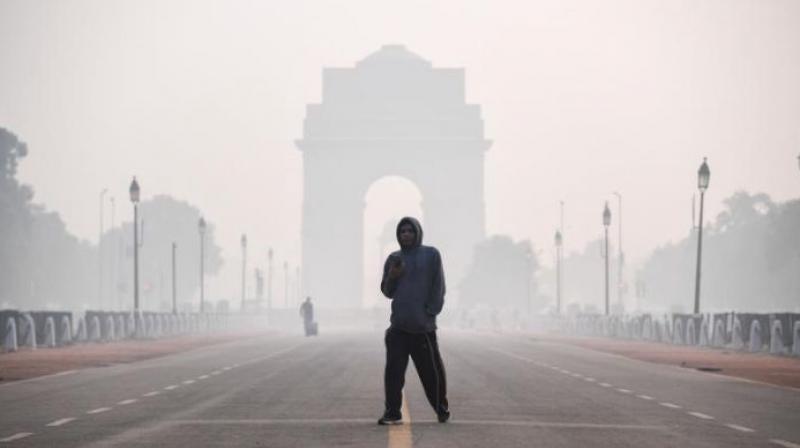 A man walks along the Rajpath street near India Gate amid smoggy conditions. (AFP)

New Delhi: Delhi was found to be the most polluted capital in the world for the fourth consecutive year in 2021 and 35 of the 50 cities with the worst air quality were in India, according to a new report.

In 2021, none of the cities in India met the prescribed World Health Organization air quality standards of 5 micrograms per cubic meter, stated the World Air Quality Report 2021, prepared by Swiss organization IQAir and released globally on Tuesday.

The report, presenting an overview of the state of global air quality in 2021, is based on PM2.5 air quality data from 6,475 cities in 117 countries.

The report mentioned that among the most polluted capital cities, Dhaka ranked second after Delhi, followed by N'Djamena in Chad, Dushanbe in Tajikistan and Muscat in Oman.

It stated, "India's annual PM2.5 averages have returned to pre-quarantine concentrations as measured in 2019. Alarmingly, in 2021, none of the Indian cities met the prescribed WHO standards of 5 µg/m3."

The report also revealed that 48 per cent of Indian cities exceeded 50 µg/m3 air quality level which is well over 10 times the WHO guidelines.

Commenting on IQAir's recent data, Avinash Chanchal, the Campaign Manager at Greenpeace India said the report is a wake-up call for governments and corporations.

"It is once again highlighting that people are breathing dangerously polluted air. Vehicular emissions are one of the major contributors to urban PM2.5 concentrations.

"With annual vehicle sales in India expected to increase, it is certainly going to impact air quality if corrective measures are not taken in time," Chanchal said.

He asserted that air pollution has a massive impact on human health and is a major indicator of the accelerating climate catastrophe.

He called for switching to cleaner fuels and the promotion of renewable energy for transportation.

"The good thing is we don't need to invest in science to find the solutions to the air pollution crisis. We know the solution and it is readily accessible. PM air pollution is produced by the burning of fuels which is a major contributor to the climate crisis.

"It is high time that governments promote renewable energy for transportation and build infrastructure that encourages cycling, public transport and pedestrians," he said.

On the global front, the report finds that only three per cent of cities and no single country met the latest WHO's PM2.5 annual air quality guidelines.