The admissions in JNU are held through entrance examinations and interviews with 80 per cent weightage for exam and 20 per cent for viva. 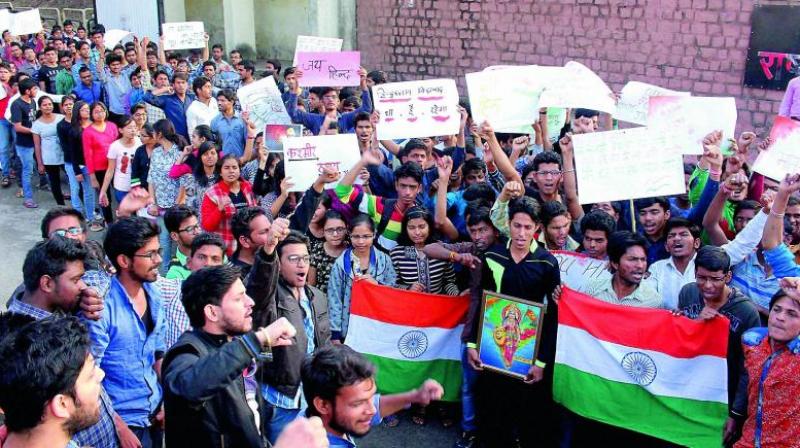 New Delhi: JNU students who have been agitating for the last three months against the new admission policy at the varsity on Wednesday went on a day-long strike to protest the massive seat cuts in MPhil and PhD courses.

The varsity released its prospectus on Tuesday suggesting seat cuts in the MPhil/PhD programmes across different courses in line with the University Grants Commission (UGC) guidelines.

Last week, the Delhi High Court had dismissed the plea by some students challenging the JNU admission policy for MPhil and PhD courses saying the UGC guidelines for these courses are binding on all varsities, paving the way for the university to begin its admission process.

"The Vice Chancellor had claimed that there will be wider consultations and there will be no seat cuts to deny opportunities to students from marginalised community but they have revealed their intentions in the prospectus itself," JNU Student Union President Mohit Pandey said.

"The strike observed today was day-long but we will decide our future course of action soon," he added.

According to the new admission policy, deprivation points are also being applied only to BA and MA courses in 2017 and not research courses.

In the School of Social Sciences, all 13 centres had announced intake in 2016, but this year only two centres can admit students. Of these, the Centre for Study of Regional Development has provision for only one intake.

The application process for the different courses in the university began on Tuesday and will conclude on April 5.

The admissions to the courses in JNU are held through entrance examination and interview with 80 per cent weightage is for entrance exam and 20 per cent for viva.

Earlier the university had decided to make the entrance as qualifying and give 100 per cent weightage to viva. But following protests from students the 80:20 formula was arrived at.