Long queue of 66 candidates on last day of filing nomination for Assembly polls. 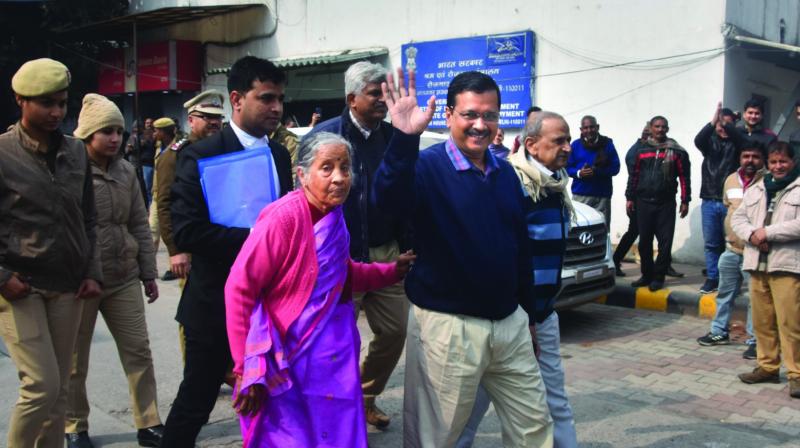 NEW DELHI: Carrying Token No. 45, Delhi chief minister Arvind Kejriwal waited for more than six hours at an election office before he could file his nomination papers on Tuesday, the last day to submit documents to contest elections to Delhi Assembly.

The Aam Aadmi Party chief arrived with his mother, father and wife at the sub-divisional magistrate’s office in Jamnagar House in the afternoon and left when it was dark because of a long queue of 66 candidates who had suddenly surfaced on the last day. Most of them were Independents.

Mr Kejriwal had missed filing his papers on Monday as he got held up by his own massive roadshow. He is contesting from the prestigious New Delhi Assembly constituency.

Mr Kejriwal, who has twice won the constituency, will be facing first-timers from the BJP and the Congress in the February 8 elections. The BJP has fielded its Delhi unit Yuva Morcha president Sunil Yadav, and the Congress has pitched its former student leader, Romesh Sabharwal.

Soon after the BJP named Mr Yadav as its candidate from the New Delhi seat, AAP spokesperson Saurabh Bharadwaj claimed that the saffron party had surrendered before the polls. He tweeted, “Going by this list and BJP candidate against CM Kejriwal, it seems, BJP has surrendered.”

In 2013 Assembly polls, Mr Kejriwal had defeated Congress veteran and former chief minister Sheila Dikshit by 25,864 votes from this seat. Again in 2015, the AAP supremo won the seat by defeating BJP’s Nupur Sharma by over 31,500 votes. The Congress, which had fielded Dikshit’s former Cabinet colleague Kiran Walia in 2015, could not secure even 5,000 votes.

On Tuesday, 66 candidates showed up to file their nomination at the SDM’s office in Jamnagar House. Holding token no. 45, Mr Kejriwal tweeted: “Waiting to file my nomination. My token no is 45. There are many people here to file nomination papers. Am so glad so many people participating in democracy.”

However, the chief minister’s deputy Manish Sisodia tweeted, “BJP planted 45 people in the line before Arvind Kejriwal. The Election Commission is deliberately giving each candidate half-an-hour or one hour... even those whose papers are not complete or those who don’t have proposers.” Mr Sisodia added, “BJP people, do whatever you want, you cannot stop Kejriwal from filing his nomination or from becoming chief minister for the third time. Your conspiracy will not succeed.”

One of the aspiring candidates, who claimed he had been betrayed by the AAP leader when he was part of the Anna Hazare anti-corruption campaign, said: “Kejriwal has no option but to stand in the queue like all of us. Let him also see what aam aadmi has to undergo in his day-to-day life in any government office.”

“BJP, Congress and many other parties have come together... LJP, JJP, JD(U) and RJD. For the time there is such a coalition in Delhi. All these parties only have one aim, ‘Defeat Kejriwal’. And I have only one aim, how to end corruption and take Delhi forward,” the AAP leader said.