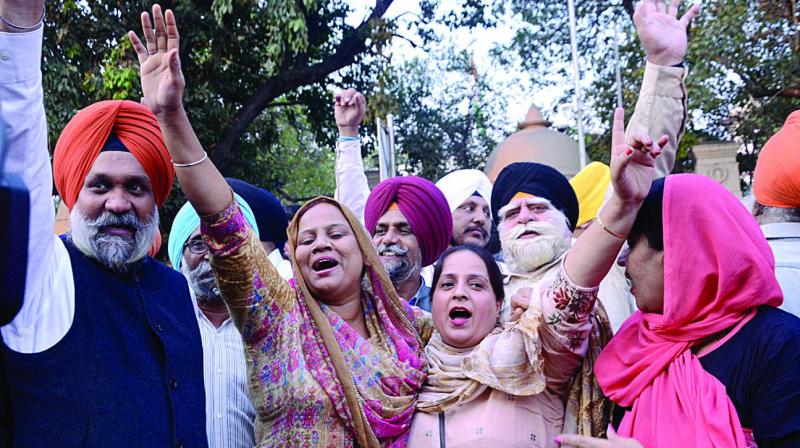 Family members of victims of 1984 anti-Sikh riots celebrate outside the Patiala House Courts in New Delhi on Tuesday after the pronouncement of the first death sentence in the case. (Photo: Asian Age)

New Delhi: A Delhi court on Tuesday awarded death penalty to convict Yashpal Singh for killing two men in the 1984 anti-Sikh riots, the first capital punishment in the case.

Additional Sessions Judge Ajay Pandey also awarded life term to co-convict Naresh Sherawat in the case. The verdict was pronounced in the Tihar Jail due to security concerns and attack on the convicts on the premises of the Delhi court.

On November 14, the court had convicted Singh and Sherawat for killing two men here during the 1984 anti-Sikh riots — the first conviction in the cases reopened by the SIT.

The Delhi Police had closed the case in 1994 for want of evidence. However, a Special Investigation Team on the riots reopened it.

While this is the first death penalty after the SIT was formed, one Kishori was earlier given the death penalty by a trial court in as many as seven anti-Sikh riots cases. However, the Delhi high court confirmed death penalty only in three cases, which were later commuted to life-term by the Supreme Court. Sikh leaders across parties, including Punjab chief minister Amarinder Singh, welcomed the court decision and hoped that others involved in the riots would also soon be brought to book for their “horrendous and inhuman acts”.

Proceedings were held inside the Tihar Jail due to security concerns as one of the convicts, Yashpal, was attacked inside the Patiala House District courts premises on November 15.