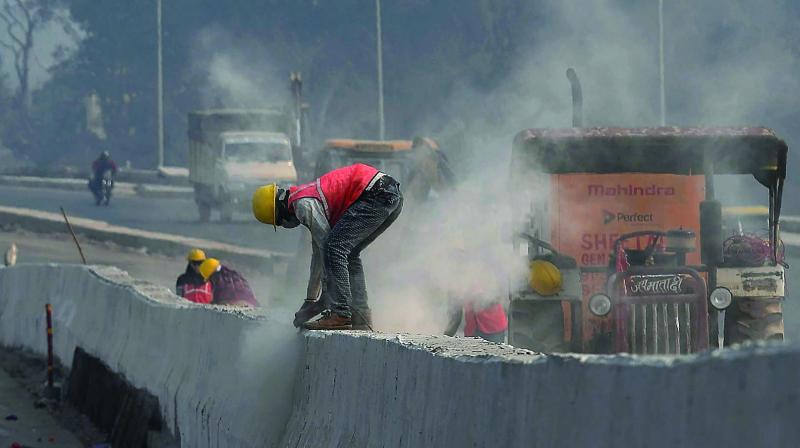 Dust billows as a worker grinds the concrete divider of an under-construction flyover as vehicle drive through smog covered New Delhi. (Photo: AFP)

New Delhi: After two days of relief, the air quality in the national capital once again turned ‘very poor’ on Monday as more vehicles hit the roads on the first working day of the week.

In the last two days, drizzling in parts of Delhi-NCR improved the city’s air quality with the air being cleanest in a month on Saturday. However, as the impact of drizzling — which had helped in flushing out the pollutants — fizzled, the air quality deteriorated to the ‘very poor’ category.

On Monday, the value of air quality index (AQI), as per the Central Pollution Control Board’s (CPCB) website, was 326 as the concentration of finest pollutants like PM 2.5 and PM 10 increased. The AQI was 298 and 292 on Saturday and Sunday respectively.

As per SAFAR (System of Air Quality and Weather Forecasting and Research), an agency of the Union ministry of earth sciences, while PM (particulate matter) 10 was in the ‘moderate’ category at 243 microgram per cubic metre (µg/m3), PM 2.5 was recorded at 154 µg/m3 in the ‘very poor’ category. Both were above their respective safe limits of 100 and 60 µg/m3.

Forecasters have said that the city’s air quality will remain in the ‘very poor’ category and chances of it deteriorating further in the coming days is less as incursion of pollutants from external sources like paddy stubble burning has stopped. Even though the level of pollutants would show some increase over the next two days, air quality is not likely to turn ‘severe’ on the AQI scale. “Now, the impact of rain is slowly diminishing. Temperature levels have dropped and moisture has also marginally increased. The current air quality is a play of those meteorological conditions and emissions from internal sources,” said SAFAR’s project director, Gufran Beig.

PM 2.5 and PM 10 are ultrafine particulates which remain suspended in the air and are capable of making inroads into human lung and blood.