While one may start withdrawing cash from Friday from the Indian Oil fuel stations, where the SBI POS machine is already available. 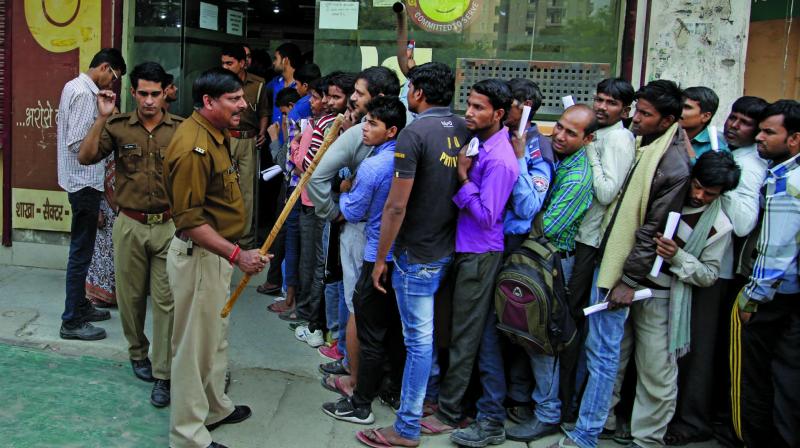 Banks have been serving only their respective customers and are not exchanging the old Rs 500 & Rs 1,000 notes from customers of other banks since Saturday.

New Delhi: Two days after the government’s move aimed at playing the role of virtual mini ATM kiosks at the selected state-run fuel stations and petrol pumps across the city from Friday, the process seemed to be in a limbo. In its initial phase, the officials of All-India Petroleum Dealer’s Association suggested that people could only swipe the card from the POS machines of State Bank of India (SBI) at selected petrol pumps and withdraw cash up to Rs 2,000.

While one may start withdrawing cash from Friday from the Indian Oil fuel stations, where the SBI POS machine is already available, other major banks like HDFC, ICICI and others can help to ease the cash crisis. But, the ground reality seemed to be quite far-fetched on Sunday.

Deepak, an official of one of the Indian Oil petrol pump outlet located at Laxmibai Nagar in South Delhi told this newspaper, “The announcement was made on Friday evening and it was late then, so, no paper work could be initiated. The following day being Saturday and the banks facilitating only the senior citizens, we couldn’t get the work done. Now, only by Wednesday or Th-ursday, things may begin to work out for us. I still have to get the hoardings done and the officials from SBI are yet to come and work on the machines.”

He further pointed, “Not all the Indian Oil petrol bunks have the mini ATM facility. Only a handful of them, who have SBI POS-supported machines, will be operational from Monday.”

Echoing the same sentiments, another Indian Oil petrol bunk employee stationed at Jangpura told this newspaper, “We have not started the facility yet. We are waiting for the nod from the higher-ups. Till then, the operations will be normal and no mini ATM facility will be provided.”

While the Indian Oil fuel stations are yet to start the mini virtual ATM facility for the commoners, the officials from Hindustan Petroleum fuel station and Bharat Petroleum located in Green Park have not yet received a formal communication in this connection.

It can be recalled that in a bid to ease away the ongoing cash crisis, the government, on Thursday, had announced that people can now withdraw cash up to Rs 2, 000 at a state-run petrol pump near them.