70 promises of AAP gone for a toss, claims booklet 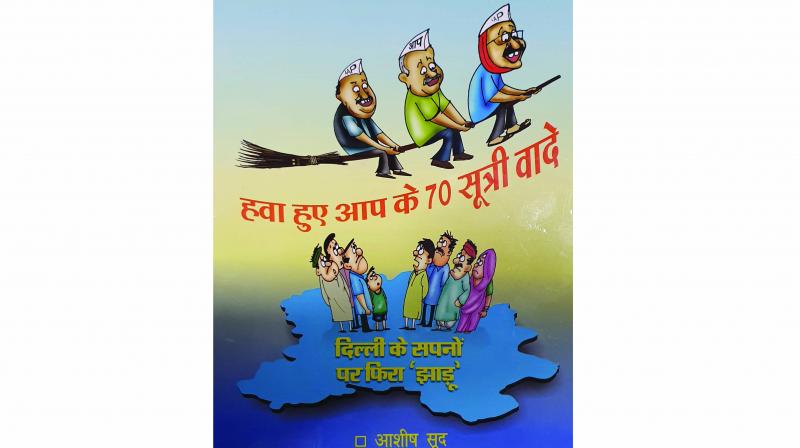 The booklet contains detailed analysis of AAP’s poll promises and their ground status.

New Delhi: Acting on the party central leadership’s directions to corner the AAP MLAs in their respective constituencies for their failure to fulfil the poll promises, former Delhi BJP general secretary Ashish Sood has come out with a 24-page booklet highlighting the failure of the Arvind Kejriwal government to fulfil the promises it had made during the state Assembly elections.

According to a party source, during the recent interaction with local BJP unit poll in-charge and Union minister Prakash Javadekar, co-incharge Hardeep Singh Puri and Nityanand Rai asked the local leaders to organise protest and gherao against all the AAP MLAs for failure to implement poll promises made in the manifesto in their respective constituencies.

While the party is still at the drawing board to plan protest and gherao, Mr Sood, the former leader of House in the South Delhi Municipal Corporation (SDMC), came out with an innovative idea and compiled a 24-page booklet highlighting AAP’s failures to fulfil the poll promises. The booklet is titled “Hawa Hue AAP Ke 70 Sutri Vade” (70 promises of AAP gone for a toss).

Mr Sood told this newspaper that this booklet was done after detailed research in order to find out the status of the AAP poll promises. He said that to his shock the Kejriwal government has failed almost all its 70 points of the manifesto.