With tears glistened in her eyes, Dikshit’s former cabinet colleague Kiran Walia said she was shocked to hear about the sad news. 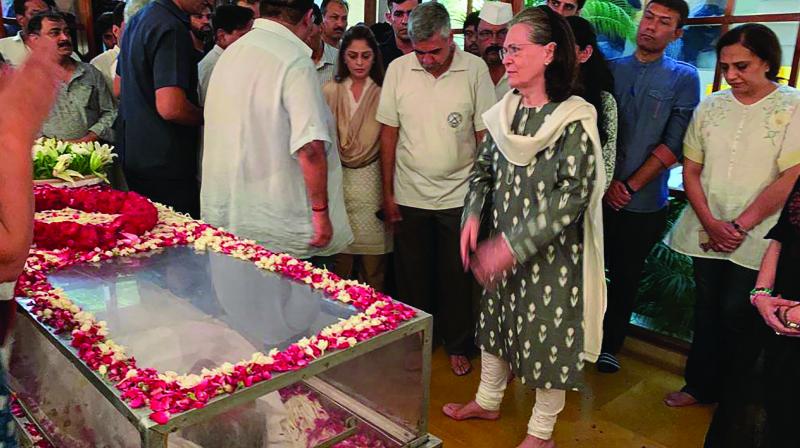 New Delhi: A long saga of Delhi politics dominance ended with former Delhi chief minister and Congress leader Sheila Dikshit, who died on Saturday due to cardiac arrest. Scores of Congress leaders and workers turned outside East Nizamuddin residence of Sheila Dikshit to pay last tributes to their departed leader. The body of Dikshit was straight away taken from Escorts Hospital to her residence at about 6 pm. Her body had been kept in a glass coffin on which red flower petals were showered by visitors who paid tributes to her.

Dikshit’s body will be taken to 24 Akbar Road Congress headquarters at 11.30 am on Sunday following which she will be cremated at Nigambodh Ghat at about 2.30 pm. Outside her residence, one could spot many people crying and mourning for their departed leader. The Delhi government has announced two-day state mourning in the memory of the former CM, who would be accorded state funeral as well.

With tears glistened in her eyes, Dikshit’s former cabinet colleague Kiran Walia said she was shocked to hear about the sad news. “I cannot believe this. I just talked to her yesterday only. She was the most affectionate person I have ever met in my life.”

Terming her as the most dedicated Congress person, she recalled Dikshit’s last conversation with her in which she told her that come what may, she would fight till party general secretary Priyanka Gandhi was allowed to meet victims in Sonbhadra in Uttar Pradesh.

The UP police had detained Ms Vadra, following which Dikshit had directed her party’s state office bearers to hold a major demonstration outside BJP headquarters at DDDU Marg. Though Dikshit could not participate in the demonstration, she protested with hundreds of workers outside the BJP headquarters. At the Nizamuddin residence, the first among the political leaders to pay tributes to Dikshit was BJP Rajya Sabha MP Vijay Goel, who said: “Her contribution towards the overall development of Delhi will be written in golden words.”

“She was a motherly figure to us. We all have learnt the basics of politics from her and grew as a leader or party worker under her guidance. Today, we have not lost only a leader but a great person,” Yogesh Bansal, a youth party worker said.