The student organisations have already started wooing us with their ways of welcoming, said Bharat Saini. 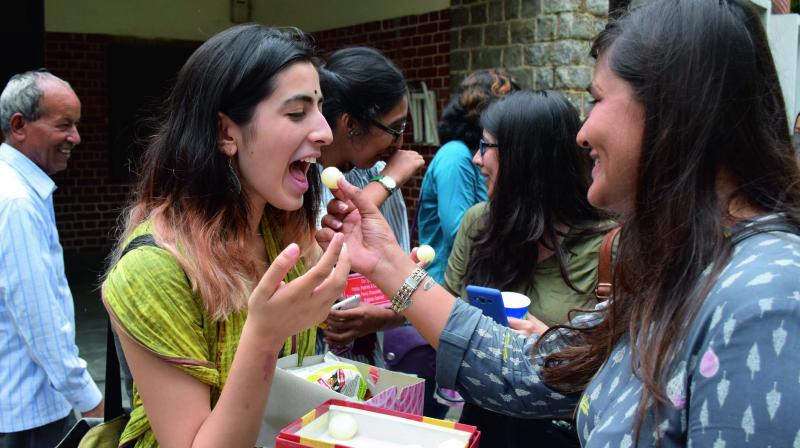 Students of Delhi University’s Miranda House welcome freshers with sweets on the first day of their college in North Campus on Thursday. (Photo: Biplab Banerjee)

New Delhi: With the onset of the new academic session at the Delhi University (DU) on Thursday, freshers thronged the colleges at both North and South campus. Confusion, thrill, excitement — each student exhibited a different emotion.

“It was very exciting attending the first day of college, that too with an orientation where I made friends within 5 minutes. It is an altogether new experience that I am having now. We even interacted with the seniors who were very welcoming,” said Yashika Bansal, who attended her first history class in Hansraj College on Thursday.

“The student organisations have already started wooing us with their ways of welcoming. They gave us roses and helped us by answering our queries. They also told us about the various features of the college campus,” 18-year-old Bharat Saini, a Ramjas College, student said.

The first day also saw some international students from different countries like America enjoying the view of the various activities taking place as part of the orientation programmes.

Mary, who has come to DU along with three of her friends as part of a cultural exchange programme, says that it will help them understand the similarities and differences between various Indian cultures.

“We are here for three more weeks. We have been going to every college at North Campus to experience the different Indian cultures. But since we have made good friends in Hindu College, we spend most of our time here,” said the 19-year-old student from the US University.

However, the North campus also saw heavy traffic outside every college besides a tight security meant to avoid any kind of ragging. Every college had a “ragging is an offence” board both inside and outside the premises.

There were many students who came with their parents and did a recce of the college campus, including the canteen. “I was a little confused on my first day. After the orientation, I could not find my classroom. But the seniors were quite friendly and helped me find the exact room. When I got to know the map of the college, I explored the premise along with my mother,” said Muskaan Gaur, an Economics student who took admission in IP College for Women.