There was a special birthday feast of his favourite meat, a cake and no disturbance from the crowd for Vijay, who turned 10. 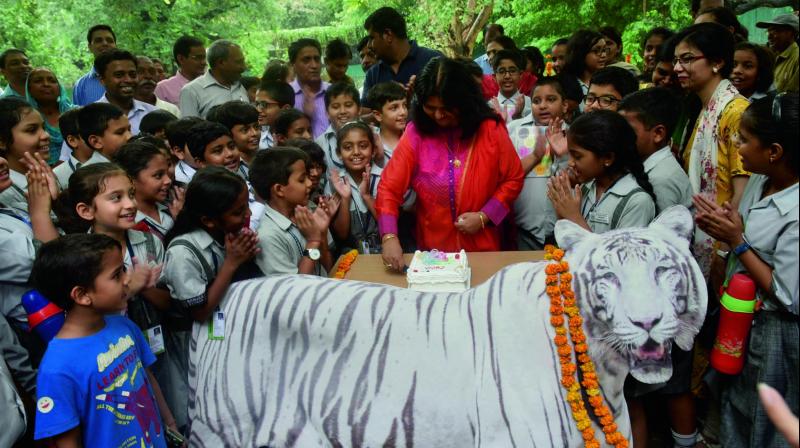 Renu Singh, director of the National Zoological Park, cuts a cake along with the schoolchildren to celebrate the 10th birthday of tiger “Vijay” at the zoo in New Delhi on Thursday. (Photo: PTI)

New Delhi: There was a special birthday feast of his favourite meat, a cake and no disturbance from the crowd for Delhi zoo inmate Vijay, a white tiger, who turned 10 on Thursday.

This creature has been in the news before. In 2014, he mauled a man who had jumped into his enclosure, , with the incident only turning him into a major crowd-puller at the National Zoological Park. A video also went viral. T

The Delhi zoo celebrated the birthday of an inmate for the first time. Vijay, a white tiger, had a special birthday feast on turning 10.

A special feast was made for the majesty consisting of his favourite meat and a troupe of 60 school students from Ramjas School, R.K. Puram had joined as guests. The school children also took photographs in front of various animal enclosures as a part of the celebration, said the zoo officials.

He had a special feast of his favourite meat sans the disturbance from the crowd. Delhi Zoo joint director Raja Ram Singh said, “We did not disturb Vijay today and ensured that the celebrating crowd did not go too close to his enclosure.”

Mr Singh said that through this celebration, the authorities wanted to raise awareness about wildlife conservation. They took the visitors to a trip of the zoo to discuss about animal behaviour in the wild and in captivity.

“For instance, animals in the wild have to make 20 attempts to get a prey. But in captivity, they are provided food and shelter. Thus, there is a marked difference in animal behaviour in the wild and in captivity,” he added.

Relating to the negative publicity that the animal had garnered, the zoo official said: “The 2014 incident was unfortunate, but it also brought into focus the poor civic sense of Delhiites. When the youth jumped into the enclosure, the onlookers made a hue and cry, forcing the animal to attack.”