Party chief will also review functioning of city unit since past 1 year. 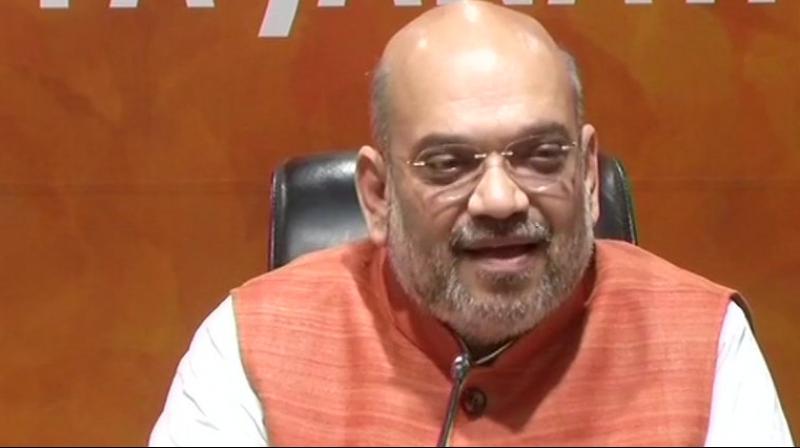 New Delhi: Launching the party’s campaign for the next general elections in the national capital, BJP president Amit Shah will reach out to more than 300 party workers, active on social media and having more than 10,000 followers, on Thursday.

After an interaction with social media warriors, Mr Shah will interact with the Delhi BJP core committee and leaders from the Scheduled Caste morcha.

Sources said that Mr Shah would also review the functioning of the Delhi BJP and take stock of work done by the party in the last one year.

“In the core committee meeting chaired by the BJP president, Mr Shah will discuss the party’s strategy and brief the plan for 2019 general elections. Mr Shah will also review the functioning of party’s Delhi unit since his last visit in July 2017 and will follow up on the work implemented on his directions,” they added.

As per the plan, Mr Shah will interact with people and party workers active on social media at the New Delhi Municipal Council (NDMC) Convention Centre. The party has selected around 350 social media activists that has a strong inclination towards BJP.

“These chosen people have 10,000 followers on Twitter, Facebook or combined. These people will be used to spread the party’s achievements ahead of the Lok Sabha polls in 2019,” said a senior party leader.

Sources told this newspaper that Mr Shah will talk about party’s social media strategy with these chosen activists and list the do’s and don’ts.

“Like the last 2014 elections, social media is going to play a crucial role in 2019 and this interaction is crucial to keep the momentum in favour for the BJP in the national capital,” the sources added.

Mr Shah’s meeting with the Scheduled Caste morcha will focus on the BJP’s dalit outreach programme in the city, which the party has started concentrating upon after it learnt that the community was drifting away from the party.

During his last visit to Delhi BJP in July last year, Mr Shah gave a list of do’s to party’s local unit and is likely to review the progress on his advice. For last two days, Delhi BJP leadership held several round of meeting to place house in order. One such meeting held on Tuesday, was attended by BJP national general secretary Arun Singh.

A BJP insider claimed that state leadership is busy in maintaining all the records as asked by Mr Shah in his last visit.