The seminar was titled ‘National Journalism in the Current Perspective: Media and Myth.’ 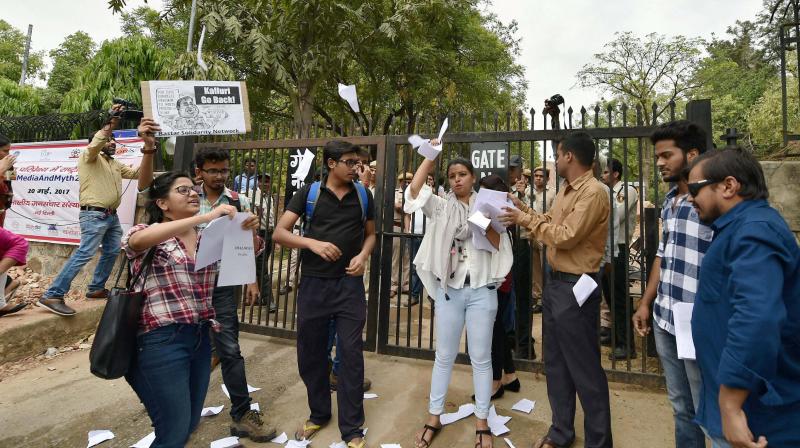 Students protest outside Indian Institute Mass Communication (IIMC) for holding a 'yajna' in the campus and inviting ex-Bastar IGP SRP Kalluri for a media seminar in New Delhi. (Photo: PTI)

New Delhi: A section of students from  Indian Institute of Mass Communication (IIMC) staged a protest outside the campus against the invitation to the controversial ex-Bastar IGP, S.R.P. Kalluri, for a media seminar on Saturday.

However, the director general (DG) of the institute, KG Suresh, rebuffed criticism over the invitation. “Why should I stop him? Why not Kalluri? He is coming to the event amid press people, and they will question him,” Mr Suresh said. Mr Kalluri, during his tenure as the Bastar IGP, was at the centre of controversies for his alleged high-handed style and human rights violations in the Naxal-affected region.

Some 50 former IIMC students had also written to their alma mater, urging it to cancel the panel invitation to Mr Kalluri who, they said, is “known for his brazen contempt for journalists.”

The event, since it was announced, attracted criticism from various quarters on social media and also from students who voiced their disapproval, allegedly citing the secular credentials of the institute. The DG, on the other hand, sought to defend the move saying it was only in India that such rituals were conducted. “Because of the ritual, there was a talk that the secularism of the country was in danger. But fools have to know that in the past we had accommodated all the religions in the country.

Lighting lamps in an event, Bhoomi Pooja, happen everywhere. Why not this? Even Muslims can perform Namaz and Sikhs can take up their rituals in the campus,” Mr Suresh said in his address in the seminar. Mr Suresh also alleged that a section of media was behaving like “mafia” and was tagging reporters as “Sanghis.” “I just reported on work taken up by the RSS in certain incidents and later was tagged a Sanghi,” he said.

Meanwhile, the protesting students were allegedly denied entry into the campus. The JNU Students’ Union too joined the protest. Delhi police and security personnel were deployed outside the campus since early morning. Police officials, who barricaded the gates, said that the institute was closed for the day.