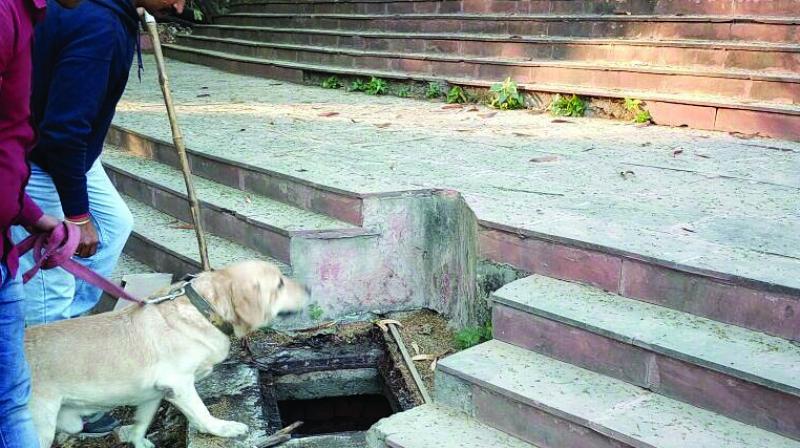 A sniffer dog is seen inside the JNU campus on Monday. (Photo: ASIAN AGE)

New Delhi: More than 600 Delhi police personnel assisted by sniffer dogs scanned the inhabited and forested areas of the JNU campus on Monday to search for clues that could help them trace Najeeb Ahmed, a student who has been missing for over two months.

The Delhi police began its search at around 11am under the supervision of DCP (Crime Branch) G. Ram Gopal Naik. A team visited Mahi-Mandvi hostel where Najeeb stayed and took help of sniffer dogs, who smelled Najeeb’s clothes. The sniffer dogs failed to make any headway and stopped after circling around the hostel. “All agencies of Delhi police, including the Special Cell, Special Branch and the local police pooling more than 600 personnel scanned the hostels, residential areas, academic blocks and the forested area today till 5 pm. The help of mounted police was also taken to scan the vast area, but nothing was found,” said a senior police officer.

About 65-70 per cent of the campus was covered on Monday and rest, including the residential areas and the interiors of the campus, will be scanned on Tuesday, he said.

The exercise is being undertaken by 12 ACPs, 30 inspectors and 60 sub-inspectors, along with hundreds of constables working under two DCP rank officers.

Meanwhile, Najeeb’s mother, Fatima Nafees, who was present at the hostel, termed the police search “too late” and “futile.”

“They should have carried out this search immediately after Najeeb went missing. But now, it’s of no use. I appeal to the police to bring back my son and I will take him home from here,” she said.

Concerned over the disappearance of the JNU student, the Delhi high court had directed the police to “scan” the entire campus, including hostels, classrooms, and rooftops, of the varsity with the help of sniffer dogs.

The directions had come on a Habeas Corpus plea by Najeeb’s mother, who has moved court to trace her son. Najeeb has been missing since October 15 after a scuffle in his hostel allegedly with ABVP students on the night of October 14. A reward of `10 lakh has been announced by Delhi police on any information about Najeeb.