The RBI on Monday said that scrapped notes above Rs 5,000 can be deposited only once per account till December 30. 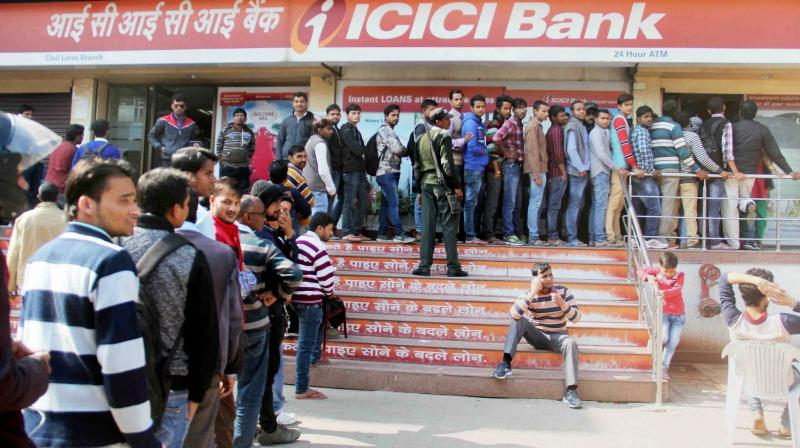 New Delhi: Unnerved by new set of guidelines announced by the RBI, people rushed to bank branches to deposit the now defunct Rs 500/1000 notes in their accounts.

Many branches witnessed sudden surge of customers for deposits on Monday, a day before the new rules kick in.

The Reserve Bank on Monday imposed stiff restrictions on depositing more than Rs 5,000 in the scrapped Rs 500 and Rs 1,000 notes, mandating that it can be deposited only once per account till December 30, that too after explaining to bank officials the reasons for not having done that so far.

Stipulating that restrictive conditions will also apply on the cumulative deposit of such notes in a single account when it exceeds Rs 5,000, RBI said that defunct currency up to any amount can be deposited under the new black money amnesty scheme PMGKY.

Under PMGKY, black money holders can deposit unaccounted cash in account which will be subject to 50 per cent tax and 4-year interest free lock-in for the remaining 25 per cent of the amount.

RBI said old notes in excess of Rs 5,000 into a bank account will be received for credit only once during the remaining period till December 30, 2016.

Even after 39 days after the demonetisation of old Rs 500/1000 notes, banks are still struggling to manage long queues as cash starved customers throng branches to get valid currency notes.

To meet the demand, branches are resorting to cash rationing as they are getting less than their requirement from currency chests.

However, the situation seems slightly better at many ATMs with increased cash availability.

Finance Minister Arun Jaitley had said everyday RBI is injecting a large amount of currency into the banking system as part of its remonetisation exercise.

"Significant amounts are going to be injected in next three weeks which are gradually bringing the pressure down. As more and more new currency comes into circulation, the recirculation itself in the banking system and ATMs will make more currency available," Jaitley had said.