The robbery happened when the bank officials came to replenish the SBI ATM on Patparganj road in E-block. 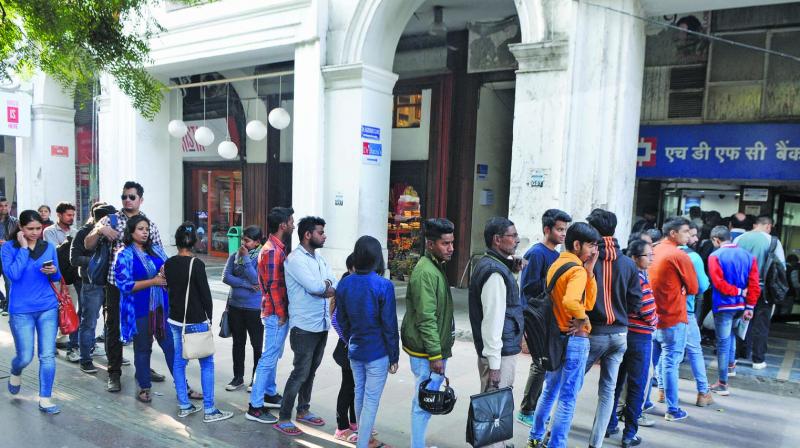 People stand in a queue outside an ATM near Connaught Place in New Delhi on Monday. (Photo: Biplab Banerjee)

The robbery happened when the bank officials came to replenish the SBI ATM on Patparganj road in E-block. The bank guard opened fire but the robbers managed to snatch the bag containing cash. This is one of the first such cases reported in the national capital after demonetisation.

“We received a PCR call at 2.15 pm informing that three men on a motorcycle snatched a briefcase containing Rs 5 lakh from a bank official and even fired in the air to threaten him. We were informed that three men on a Pulsar bike looted Rs 5 lakh from a bank official in front of the SBI ATM at Pandav Nagar bus stop,” said a senior police official.

According to the police, a Brinks security cash van, after replenishing cash at different ATMs in the area, had arrived at the SBI ATM near Pandav Nagar bus stop this afternoon. The cash custodian, Abdul Kadir, had taken out the briefcase containing Rs 2,000 and Rs 500 notes when three men on a bike reached the spot.

“One of the accused men caught hold of the gunman who was standing near the cash van. The other accused snatched the briefcase containing Rs 5 lakh from cash custodian Abdul Kadir,” said the official. In the scuffle, one of the accused fired in the air to scare Mr Kadir. After snatching the briefcase, all of them fled from the spot on their bike. The security van gunman also fired in the air but by that time, the three men had fled. The accused had their faces covered with helmets and mufflers so that the victim couldn’t see their faces. The police is questioning shopkeepers to gain clues that could lead them to the accused, but so far, they haven’t found any leads.

It is suspected that someone who knew about the movement of the van and the estimated time by which it will arrive at the ATM to replenish the cash could be involved in carrying out the heist They also searched for CCTV footage in the nearby areas, but so far, they haven’t found any footage that could help them identify the bike or the riders, sources said.