The chief fire officer from DFS, Atul Garg, said that they had rushed two fire tenders to the spot. 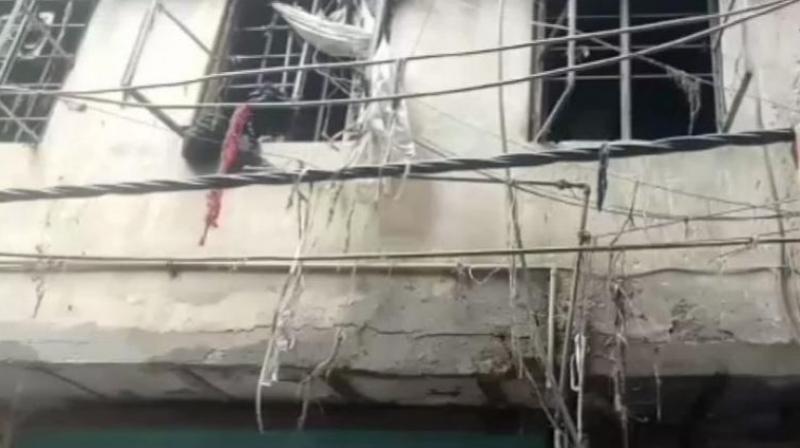 Four people were killed after fire broke out at a factory in crowded Beadonpura in central Delhi's Karol Bagh on Monday. (Photo: ANI)

New Delhi: It was a black Monday when loud cries for help and the sight of labourers, who were entrapped while escaping a building on fire, turned into harrowing silence for the onlookers.

Four workers, including two women, were killed while two others escaped with minor burn injuries when a fire broke out at a garment manufacturing unit in Karol Bagh on Monday afternoon.

The blaze was sparked when one of the workers using white patrol — a chemical used to clean fabric — accidentally spilled the liquid, which caught fire from a steaming iron kept nearby. The police has registered a case under Section 304 of the IPC and is probing if the unit was being run illegally.

The owner of the factory, Ajay Khurana (45), has been arrested, the police said.

According to police, the fire broke out at around 12.15 pm on the first floor of a garment factory at Bidanpura in Karol Bagh. The first floor, which has the pressing unit for the garments, had six workers working inside at the time of the incident.

Locals and witnesses told the police that they saw smoke coming out of the building and rushed there when they heard their cries. Officers from the Delhi Fire Services (DFS) and police said that while two workers, Ajit Kumar (23) and Pooja, managed to rush out of the building in time. Bhagan Rai (55), a specially-abled man who faced difficulty in walking; Ram Naresh (40); Aarti (20); and Aasha (40) got stuck and were killed in the fire.

Avatar Singh, the station officer from the fire station at Rani Jhansi Road, who had rushed to the spot, said that preliminary enquiry has revealed that Bhagan Rai was working at one of the three pressing tables in the room.

The chief fire officer from DFS, Atul Garg, said that they had rushed two fire tenders to the spot.