Delhiites prone to lung cancer due to pollution 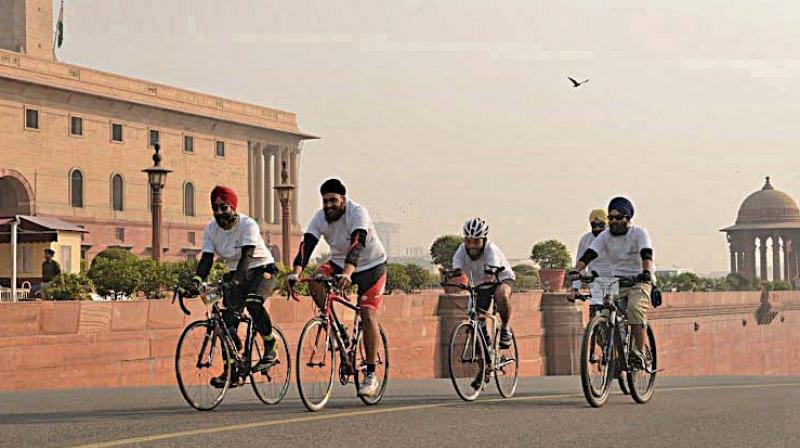 Cyclists take part in a rally to create awareness about pollution in New Delhi on Saturday. (Photo: Asian Age)

New Delhi: Concerned over the poor air quality in the national capital, health experts warned that in the long run, it might make them more prone to lung cancer. Doctors say that given the increasing amount of hazardous PM 2.5 in Delhi’s environment, toxic air might have replaced smoking as the top risk for lung cancer. Former dean (academics) of AIIMS, Dr P.K. Julka, said that clinical evidence suggests that as compared to 20 years ago, not only have the incidence of lung cancer increased substantially, but the number of non-smokers reporting the disease has also increased by almost 10 per cent. According to Dr Julka, who is now the director at the Max Oncology Day Care, Lajpat Nagar, so far, smoking has been considered the most significant risk factor for lung cancer. In fact, it has been estimated that 80 per cent of lung cancers are caused due to exposure to tobacco smoke, either direct or passive. “In the national capital, which is inhaling highly toxic air, people’s lungs are exposed to bad air that is equivalent to smoking several cigarettes a day,” he said.

The International Agency for Research on Cancer (IARC) has already declared outdoor air pollution as a carcinogen. The Global Burden of Disease Project 2010 attributed an estimated 3.2 million deaths worldwide to air pollution, including 2,23,000 to lung cancer.

“In 2013, an IARC supported expert panel concluded that there was enough evidence to say that outdoor air pollution can cause cancer in people. It decided that a specific part of air pollution, known as PM 2.5 (solid dust-like particles, or ‘Particulate Matter,’ less than 2.5 millionths of a metre across) are the prime cancer-causing ingredient in outdoor air,” added Dr Julka.

“In 2015, medical experts in China predicted that China will have 8 lakh new diagnoses of lung cancer each year by 2020. The country’s deteriorating air quality being a prime cause of this horrific surge. While we are yet to conduct a similar analysis in India, there is consensus in the medical community that the toxic air being inhaled in Delhi and other metropolitan cities is driving a major surge in cases of lung cancer. This is evident from the fact that the number of non-smokers contracting lung cancer is steadily increasing,” Dr Rajpurohit said.