Wasim Akram, the special projects manager of the Wildlife SOS, 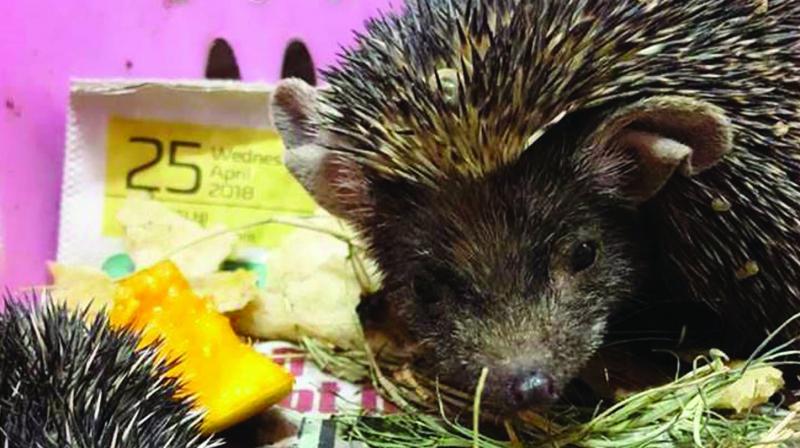 The railway authorities were alerted about the incident. On further investigation, they found two hedgehogs huddled up inside the bag.

New Delhi: Two Indian hedgehogs, which were smuggled by train, were found inside an unclaimed bag in a train compartment at the Sarai Rohilla railway station on Monday evening.

A passenger found the unclaimed bag while alighting from a train at the Sarai Rohilla railway station. To his surprise, he noticed that the bag was moving and there was a faint scuffling noise. The railway authorities were alerted about the incident. On further investigation, they found two hedgehogs huddled up inside the bag.

Concerned for their well-being, the passenger then contacted the Wildlife SOS team on their 24-hour rescue helpline number. Later, the two were identified as an adult female and a baby. Both animals are currently under the care of the Wildlife SOS. Once deemed fit by the veterinarians, they will be released into the wild.

The Indian hedgehog (Paraechinus micropus) is native to India and Pakistan. Spines cover their dorsal skin and part of the sides. As a defence mechanism, they curl up into a ball to protect themselves from predators. The species is nocturnal and lives mainly in burrows near shrubs and bushes. They feed primarily on insects such as beetles, small vertebrates, scorpions, and eggs of ground-nesting birds. The females have a litter of one to two babies at a time.

Kartick Satyanarayan, the Wildlife SOS co-founder and CEO, said: “This was clearly a case of poaching, wherein the animals were being smuggled across state borders.”

In India, hedgehogs are hunted locally for their meat as well as for medicinal purposes on account of various superstitious myths and beliefs attributed to them. They are also kept as exotic pets in most countries. Awareness regarding the illegality of the offense is incredibly important to curb cruelty and poaching of wildlife species in India.”

Wasim Akram, the special projects manager of the Wildlife SOS, said: “Both the mother and baby are extremely stressed. We are currently monitoring their health status. They will be released into the wild once deemed fit by our veterinarians.”