The development came with Deputy CM Manish Sisodia and minister Satyendar Jain resuming work after they were discharged from hospital. 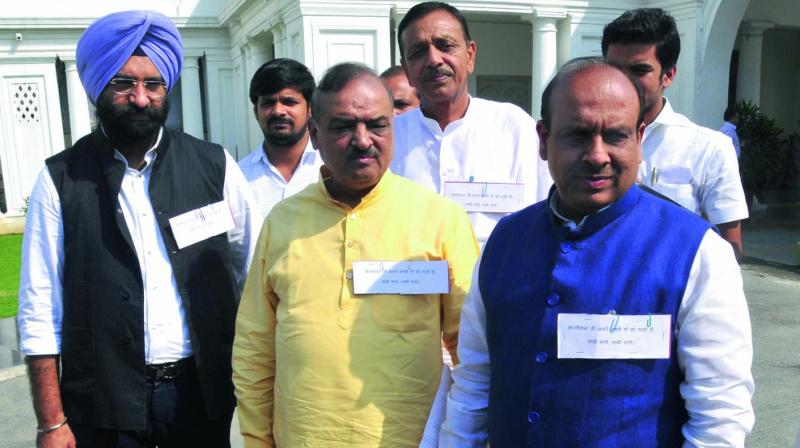 New Dellhi: The BJP leaders, who had been on a hungerstrike at the Delhi Secr-etariat, ended their protest on Tuesday after CM Arvind Kejriwal and his ministerial colleagues called off their sit-in at the lieutenant-governor’s office.

Barring Mr Pradhan, all of them started hungerstrike from June 15. Mr Gupta had to be hospitalised earlier in the day due to falling health. Mr Sirsa, Mr Verma and Mr Mishra broke their fast in the presence of Union minister Harsh Vardhan who visited them at the Delhi secretariat.

Mr Gupta claimed victory, saying the chief minister and his Cabinet colleagues were forced to end their “meaningless” dharna due to “stern warning” of the high court and struggle of Opposition leaders.

Meanwhile, Delhi BJP chief Manoj Tiwari said that at the end of the nine days dharna “nautanki (drama)” by Mr Kejriwal, the people of the city were feeling deceived.

By making a joke of the administrative system he has not only stalled the development of city, but has also failed to provide basic water and power supply to the people.

“The lieutenant-governor has all along been advising the chief minister to develop dialogue and cordial relations with the bureaucracy and today also he has repeated the same in a communique to Mr Kejriwal. People need to understand for what demand Mr Kejriwal sat on dharna and what has he achieved in these nine days,” Mr Tiwari added.

Delhi BJP president has lauded MP Pravesh Verma, leader of opposition Vijender Gupta and other MLAs who have been sitting on dharna demanding proper water supply for the citizens.

“Many congratulations to people of Delhi. Our struggle as well as stern warning from HC has borne fruit with CM @ArvindKejriwal ending his meaningless dharna & returning to work. Everyone except him was seen working in the Delhi Secretariat today, including AAP ministers,” Mr Gupta tweeted.

Earlier, Mr Kejriwal called off his nine-day-old dharna at the office of Lieutenant Governor Anil Baijal, demanding him to direct IAS officers to end their “strike” and approve doorstep ration delivery scheme.

The development came with Deputy CM Manish Sisodia and minister Satyendar Jain resuming work after they were discharged from hospital. The IAS officers who had been boycotting meetings of AAP government ministers today started appearing in the meetings called by Mr Sisodia and other ministers.

The officers’ protest was kick-started by an alleged attack by AAP legislators on chief secretary Anshu Prakash during a late night meeting at Kejriwal’s residence on February 19.