From Jantar Mantar, the transporters marched till Haryana Bhawan to protest against Haryana government against increased road tax by it. 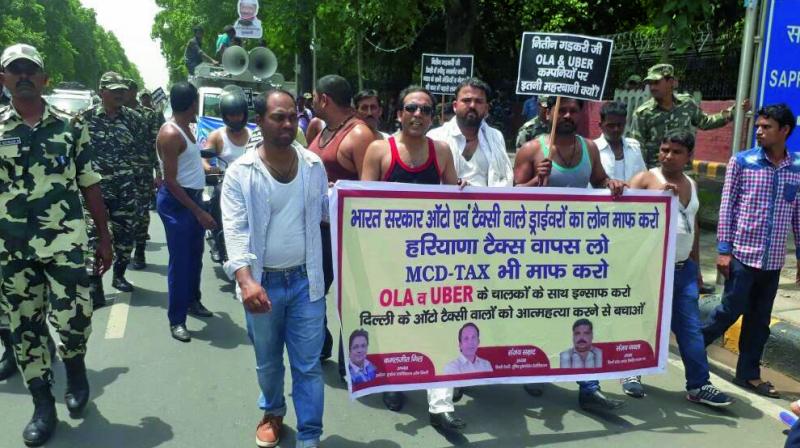 New Delhi: Scores of taxi drivers in the national capital protested on Monday against the “destructive politics” of cab aggregators Uber and Ola.

Drivers, led by Sarvodaya Driver’s Association, protested at Jantar Mantar and said that policies like pool sharing and “arbitrary fixing of fares” are affecting the livelihood of private taxi drivers and have demanded that the city government fix the fare for Uber and Ola.

“The number of Uber and Ola taxis has reached around 35,000. Their registration should be stopped as traffic jams are happening because of them,” said Mr Sanjay Samrat, president, Delhi Taxi Tourist Transport Association.

The agitators, who protested without their shirts on, to demonstrate that the impact of the policies have become a question of “life and death” for them, also demanded that their loans should be waived off by the government on the lines of farmers loans.

From Jantar Mantar, the transporters marched till Haryana Bhawan to protest against Haryana government against increased road tax by it.

They alleged that the road tax for vehicles with All India Permit entering Haryana has been increased by around 1,000 per cent. “Earlier, we paid Rs 950 for three months as tax to the regional transport authority. This has been increased to Rs 9,100 now. They have also increased road tax to Rs 100 for four seater cars and Rs 500 for seven seater cars per day effective from April 1,” said Mr Samrat.

He added that it has been done to benefit companies like Ola and Uber, which have NCR permits.

The association threatened to go on an indefinite strike and also resort to ‘chakka-jam’ if the hike is not reversed as passengers are refusing to pay the increased tax.

The protesters have submitted a memorandum to Resident commissioner of Haryana at Haryana Bhawan to reverse the order as it affecting scores of transporters.