On the issue of women safety, the newly elected mayor of SDMC said that the corporation is in the process of identification of dark spots. 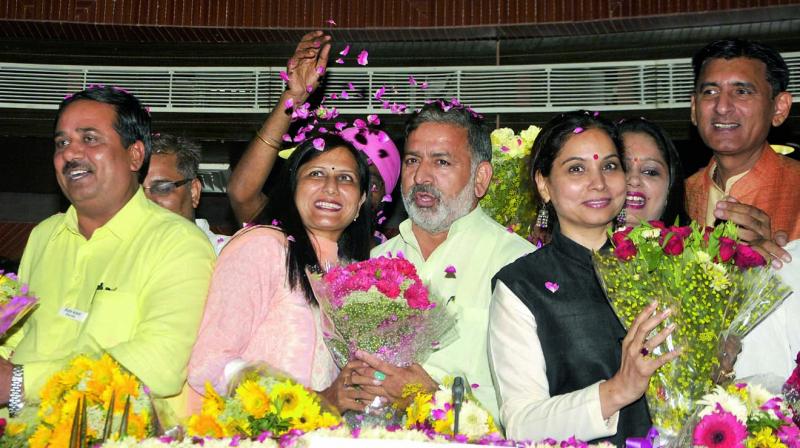 New Delhi: BJP councillor Kamaljeet Sehrawat, who had won the civic polls by a record margin, was elected unopposed as the mayor of South Delhi Municipal Corporation (SDMC) on Friday. After taking over, Ms Sehrawat said that she will meet Union home minister Rajnath Singh and request him to find a way for direct release of fund to the civic bodies in the national capital.

Ms Sehrawat demanded that Arvind Kejriwal-led Delhi government must release the fund to the civic bodies as per the recommendation of the Delhi Finance Commission (DFC).

“We are here to serve the people and politics should not hamper people’s life. We request Delhi government to release fund as recommended by the DFC. If they do not release the fund, we will meet the Union home minister and request him to find a way so that the Centre can directly provide fund to the civic bodies to carry out development work in the city,” added Ms Sehrawat.

“Clean, green, and healthy Delhi is our priority. Parks will be beautified and health centres will be upgraded with additional facilities,” the new mayor  added.

On the issue of women safety, the newly elected mayor of SDMC said that the corporation is in the process of identification of dark spots. Once identified, LED lights will be installed at all dark spots soon.

On the topic of transparency in civic administration, Ms Sehrawat said m-governance is needed for success of the Digital India Programme. “SDMC had already made most of its services online, so we need transparent and hassle free system for a smart city now,” she said, adding that the corporation will try to implement the Deen Dayal Antodya Yojna Scheme for providing food to the poor at Rs 10, at the earliest.